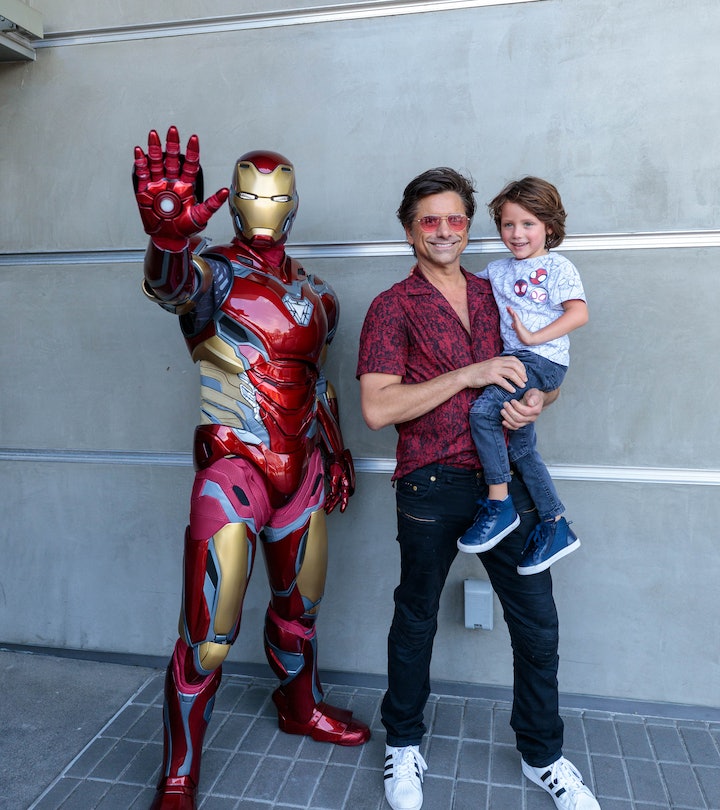 “I've been trying to get Billy to think I'm cool since he was 2 months old.”

John Stamos may be an Emmy-nominated actor, a talented musician, and everyone’s favorite Uncle Jesse, but all of that hasn’t impressed his 4-year-old son Billy. Until now. The Full House star finally found a role that convinced his son with wife Caitlin McHugh that he’s “pretty cool,” Stamos reveals to Romper. He’s voicing the legendary pirate Captain Salty Bones in the Mickey Mouse Funhouse: Pirate Adventure special and starring as Tony Stark/Iron Man in Season 2 of Marvel’s Spidey and His Amazing Friends.

Stamos has a “really cool studio” at home where he’s done his recordings for the Mickey Mouse Funhouse special, which has been a little tricky with a 4-year-old hanging around. “Billy can come up and he watches. Then he starts talking or starts eating and starts making noise, directing me like he learned from his mother or something,” Stamos jokes. “I'm like, ‘Get out!’”

Sitting quietly and admiring your parents at work just isn’t in a preschooler’s wheelhouse. But in quiet moments of reflection, the Big Shot star often thinks, “What is going through his mind?”

“I just wonder what he must think. Like, ‘Why is my dad up there?’” Stamos says, referring to Billy seeing him on TV and on stage, like when he performed with The Beach Boys. At one point mid-show, Billy jumped up and bolted toward his dad. “It was a moment that I'll never, ever forget. It was just magical.”

Despite this, Billy still didn’t think Stamos was cool. No, for that, the “Ex Teen Idol” (according to his Instagram bio) had to turn into a superhero first.

“I've been trying to get Billy to think I'm cool since he was 2 months old, and it hasn't worked,” Stamos says. “The other day, we were driving to somewhere, and he was sitting in the backseat and The Beach Boys come on. He's been to some concerts. And I said, ‘Hey, Bill. Isn't Daddy cool that I get to play with The Beach Boys?’ And he took the longest beat, and he goes, ‘Dad, do you know the Beatles?’ Hand to God,” Stamos laughs.

Another time, Stamos came home early and caught Billy watching Full House with his nanny, and he decided to tease them a little. “I go, ‘You're grounded, and you're fired,’ to the nanny,” Stamos says. But even though he likes to watch him on TV, Billy loves making fun of his dad, too. “I'll say, ‘Billy, could you go put your clothes away over there?’” Stamos says. “And not in a cool, funny way — in a mocking way — he'll be like, ‘Yeah, you got it, dude!’”

So Stamos did what any parent who wants their kids to like them does — he took an interest in Billy’s world.

“The first show that [Billy] started watching on Disney+ was Funhouse,” Stamos says, recounting the moment he told his son he was going to be in the show. “I said, ‘Guess what? I'm playing Salty Bones.’ He goes, ‘What? Who's Salty Bones?’ Then he started to think I was pretty cool,” Stamos says.

“Then a few months later — he'd already been watching Spidey and His Amazing Friends — he was obsessed with superheroes. And I remember just watching that show with him not even knowing I was ever going to be on it.” Stamos’ reaction? “That’s a cute show. That’s fun,” he says. “I was thinking, too, ‘They need some music.’ And then when they called me to do this I said, ‘Yeah!’ And now I'm cool to him. He tells everyone, ‘My dad's Iron Man. My dad's on Spidey.’ He was so cute about it.”

Not only did he impress his son with his superhero role, but Stamos was ready to “pay it forward,” as Iron Man is the first adult character in the series and a mentor to Spidey. “I loved the idea of mentorship and I have had a lot of great mentors in my life, so to be a mentor to Spidey, I think, was right.”

First on his mentor list is Billy — who’s picked up some of Stamos’ habits. When asked what’s more challenging, catching evil villains as Iron Man or getting Billy to sit still for a picture, Stamos doesn’t hesitate when he answers, “Two!”

“And not only sit still. He'll either do the goofiest smile. [I’ll say] ‘OK, come on, Billy. Smile’ And he’ll go like this,” Stamos says, as he shows a funny, teeth-bared kind of smile that somehow all kids do. “Or, now he’s making faces in every picture. I'm like, ‘Son, you're going to look back at those pictures and be so mad that you made a goofy face. My hand to God, I'm looking at old pictures of me, I'm doing the same crap. I'm doing the same thing.”

Who knows? Maybe Billy has a future in entertainment, too. At the very least, he can put “director to John Stamos” on his resume!

Watch Mickey Mouse Funhouse: Pirate Adventure and Season 2 of Marvel’s Spidey and His Amazing Friends on Disney Junior and Disney Channel on Aug. 19.