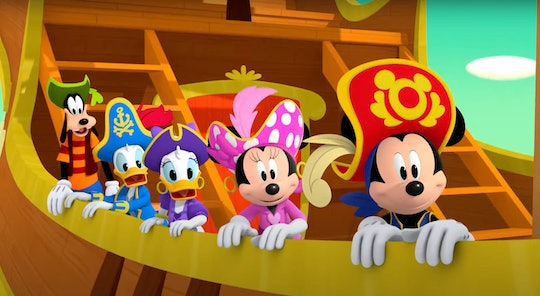 John Stamos makes an appearance as the legendary Captain Salty Bones in this cute special.

Ahoy, pals! Sail the Seven Seas with Mickey Mouse and the gang next month on Disney Junior. Mickey and his maties — Minnie Mouse, Goofy, Donald Duck, and Daisy Duck — are embracing the pirate life in a brand new Mickey Mouse Funhouse special premiering Aug. 19. In Mickey Mouse Funhouse: Pirate Adventure, the gang will meet the legendary pirate Captain Salty Bones, who is voiced by John Stamos! Romper has an exclusive look at the trailer for this cute special, which will also be available to stream on Disney+.

In Mickey Mouse Funhouse: Pirate Adventure, the pals’ enchanted talking playhouse named Funny transforms into a ship fit for pirates. The crew wear special pirate costumes, including colorful hats with feathers, crossbones, striped leggings, and more in this adventure. Mickey, Minnie, Goofy, Donald, and Daisy climb aboard their ship to go on an epic treasure hunt. Along the way, they must work together to get around obstacles on the boat and on the treasure island.

Mickey Mouse Funhouse is a series for preschoolers designed to learn about unique worlds that inspire the imagination. The show encourages creative play and wish fulfillment, and imparts lessons of friendship and ingenuity. It also introduces kids to diverse characters, including a deaf gnome named Fig who communicates via ASL.

Stamos (aka Uncle Jesse on Full House) plays the skeleton pirate captain in this special. His character is a skeleton (with eyes) who wears black pirate boots with gold buckles, a red bandana tied around his skull, and a pirate hat featuring a picture of a skull-and-bones saltshaker.

This isn’t the first time Stamos has lent his voice to an animated show. The actor, who is dad to Billy, 4, with wife Caitlin McHugh, also voices Iron Man in Spidey and His Amazing Friends Season 2, which will premiere in August as well, per Collider. But even before becoming a dad, Stamos has always been great with kids, first with a baby Michelle (played by Mary-Kate and Ashley Olsen in Full House) and more recently in 2021’s Muppets Haunted Mansion.

More Like This
Exclusive: CoComelon Is Going On A Live Tour Across the U.S.
A Guide To Every Dog Breed In 'Bluey'
Netflix Has Lots For Families To Look Forward To This August
10 Of Bandit’s Funniest Dad Lines From 'Bluey'