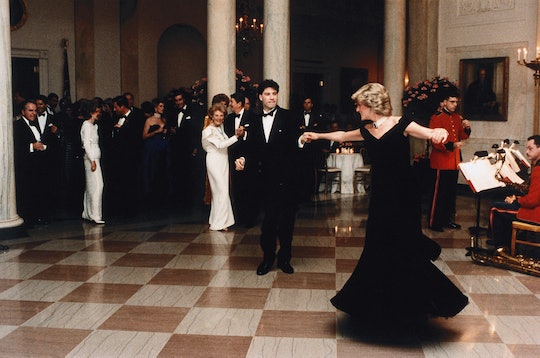 John Travolta Opened Up About His Iconic Dance With Princess Diana

More than three decades later and John Travolta is still mesmerized by his time with the late Princess Diana. In a recent interview with Esquire Spain, the actor opened up about dancing with the princess and he said it was “like a fairy tale.”

Travolta danced with the Princess of Wales at the 1985 state dinner at the White House. President Ronald Reagan was the commander-in-chief at the time, and the evening was part of the late princess and Prince Charles’ tour of the United States.

The 67-year-old actor, who is best known for his dance breaks in Grease and Saturday Night Fever, is obviously not shy about busting a few moves on the dance floor. But Travolta told the magazine that spinning Diana around the floor that night was unexpected and not as easy as it looked in the now-famous pictures of the moment.

“I didn't expect to be asked to dance with her. I had the great privilege and honor of doing so,” he recalled to Esquire Spain. “And I thought, ‘There must be a reason to do this, and I'd better give it my all...’ This meant guiding the dance well and seeking to have fun. That was the easy part, but presenting myself to Diana in the right way, conveying security, and asking her to be my dance partner was a complicated mission.”

But when he did ask the princess and they were out on the dance floor, the moment became magical and surreal for him. “And there we were, dancing together like in a fairy tale,” he told Esquire Spain. “Who could have imagined that something like this is going to happen to you someday?”

In a December 2019 interview with Yahoo! Entertainment, Travolta described how Diana took the lead when she danced with her husband Charles and made a note to let that happen with their moment. “She led the way, and I thought: ‘Well, that’s not going to happen! I’ve got to go back to my school days of learning ballroom dancing and show that I can lead her,’” he said.

Princess Diana was killed in a tragic car crash in 1997 at the age of 36. Those who were lucky enough to be in her presence are forever touched by her legacy, like Travolta. As he told Esquire, “I was smart enough to record it in my memory as a very special, magical moment.”