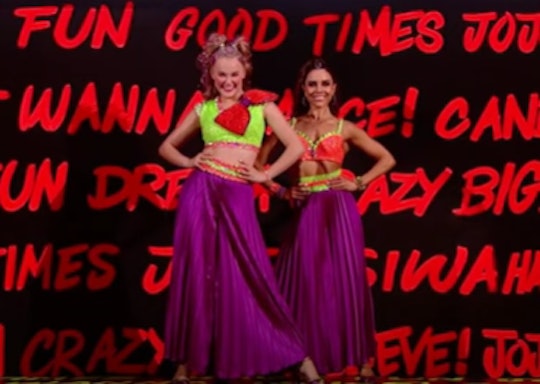 She was the first person to dance with a same-sex partner.

Jojo Siwa made beautiful history on Monday night when she took to the Dancing With The Stars stage with dance partner Jenna Johnson. The YouTube star became the first person in the show’s history to dance with a same-sex partner, and it was a triumphant moment of representation for the LGBTQ+ community.

Siwa and Johnson wore matching colorful outfits during their dance to “Are You Gonna Be My Girl” by Jet and their performance earned loads of praise, including top score of the night from the judges with a 29 out of 40 even after Johnson stumbled and Siwa seamlessly caught her before she fell.

The praise was well-earned, not just because the two women were full of energy and joy during their dance. But because this was the first time same-sex performers ever hit the stage together. That significance of that dance was not lost on Siwa, who came out as a member of the LGBTQ+ community in January.

“Making history and Top score of the night was literally a dream come true for me,” she wrote on Instagram. “Chase every dream you have and believe in yourself. Know that I love you all and I am smiling so big right now because of you, we did this!!!”

Siwa’s dance had her fans reaching out to thank her and show their support on social media, like this parent who wrote, “Let my kiddo stay up past her bedtime to watch. Seeing her sheer love, adoration and excitement to watch you dance as you normalize and shine visibility on the queer community is everything. Representation matters, Siwa. I appreciate you.” Another person wrote on Twitter, “this was cool as hell. so glad to see this happen and congrats to jojo siwa for insisting on a same sex partner.”

The Dance Moms star was thinking about her moment in history even before she took to the stage, saying in a message to her fans backstage per People, “For the first time in Dancing with the Stars history, I am dancing with another female, and I'm really, really proud. I came out in early 2021 and what I love to do is make truly being who you are easier for kids.”

Representation matters on every level. And it’s winning high scores on Dancing With The Stars.