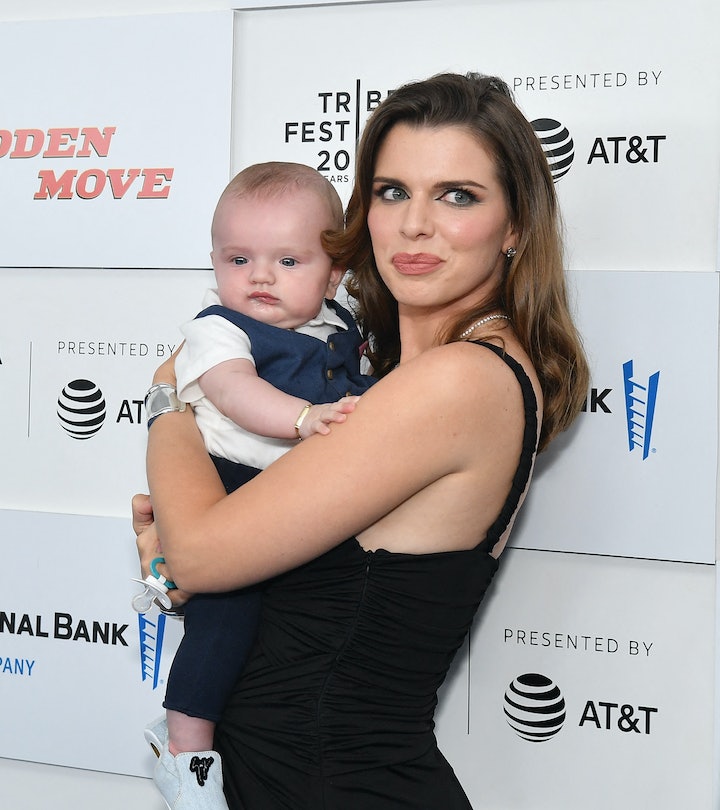 Julia Fox Urges Parents Not To Buy Toys For Their Kids, Suggests Tools, Cleaning Supplies Instead

"The concept of childhood was only invented in the 18th century. Prior to that, children were just regarded as little adults."

Uncut Gems star Julia Fox has gained attention for a recent video, posted to TikTok, where she takes a bold stance about a seemingly innocuous target: children’s toys. “I think that the idea of childhood was invented as a way to just get parents to spend a lot of money on sh*t that ... is not really teaching your kid anything, you just end up raising a kid that’s like helpless and doesn’t know what to do,” she laughs.

So she suggests parents pick up something more practical instead: mini-cleaning supplies instead. Her 19-month-old son, Valentino, is more interested in these things anyway. “Start teaching them those life skills really young so that when they enter the real world they don’t have to outsource for everything and they know how to do things for themselves,” she says.

Fox opens her video with the assertion that childhood is a concept that did not catch on until the 18th century. “Prior to that,” she says, “children were just regarded as little adults; that’s why a lot of old paintings don’t look the same way that we show [children] today.”

She appears to be espousing an idea popularized by French medievalist Philippe Ariès, who asserted in his seminal work Centuries of Childhood that childhood was a social construct that did not emerge as an accepted concept until the 17th century. It’s in this work that he cites early European portraiture (in which children look like and are dressed as miniature adults, rather than realistically depicted children) as evidence of these attitudes. While Ariès has been praised as a leading historian in the study of childhood, his work is not above criticism — quite a lot of criticism, in fact. In his Defence of History, for example, historian Richard J. Evans points out that, “in everyday life children were indeed dressed differently to adults; they were just put in adult clothes to have their portraits painted,” which should be a familiar concept to any modern parent who has had professional photos taken of their child wearing a button down shirt and bowtie.

All that said, Fox’s point that kids are more interested in what adults are doing than any Barbie, toy car, or block is pretty indisputable. Even when they are playing with their toys (and let’s be clear, children have been playing with toys for as long as there have been children) they’re very likely to be mimicking adult behaviors, probably because they are hardwired to do so.

It’s been well established that children as young as toddlers generally want to help their parents with household chores. And while play is considered a fundamentally important aspect of child development, but there’s nothing that says “play” and “learning vital life skills” are mutually exclusive. (I mean, isn’t that kind of the point of Bluey, people.) The very attitudes and skill-sets than make kids want to play can be used to help them learn to be more self-sufficient.

Of course, nuanced analysis of celebrity statements are not the internet’s strong suit: Fox’s hot take has prompted opinions, creating a hot-take ouroboros across social media.

While some have heartily endorsed Fox’s stance, others have mocked the video (Ines Helene tweeted Fox’s video with the caption “Teach your toddler to file your taxes today!”), claimed her child will resent her for “making” him work, likened her statement to promoting child labor, and criticized her penchant for designer fashions.

For her part, Fox has taken in the criticism with mild annoyance and good humor. On her Instagram Stories, she posted a screenshot of a Buzzfeed article about her video, saying, in part “We wonder why the future of our country is doomed” followed by pictures of Valentino on the playground the with the captions like “Here’s a cute pic of my son at the labor camp he works at” and “Trauma rears its ugly head yet again. My poor Valentino has clearly not recovered from the sweeping that took place last night at our home. Parents please share tips on how to fix my son!”

More Like This
Prince William Was Quick To Remind Someone That He Does School Drop-Off Duty Too
Kristen Bell Reveals Her Daughters' Handy School Night Routine Called "Flat Man"
10 Parenting Lessons From Abbott Elementary That You'll Want To Write Down
'Squid Game' Is Coming Back For Season 2 On Netflix: Here’s What Parents Need To Know