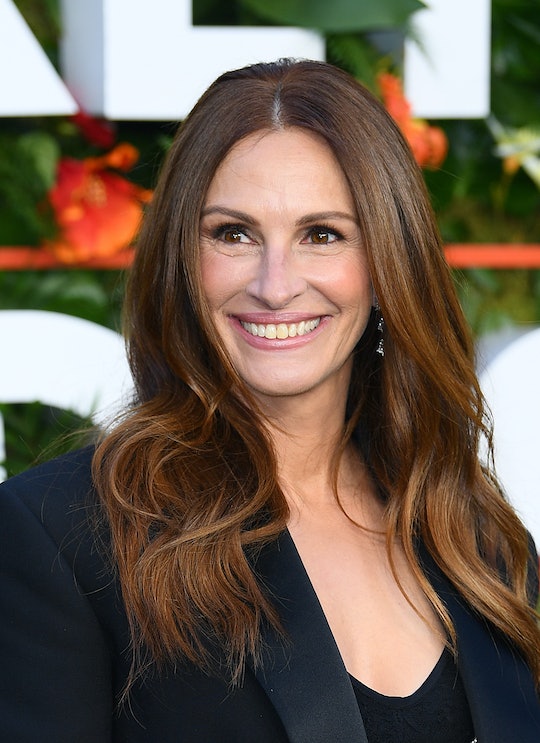 Julia Roberts probably has the brightest smile in Hollywood, and the mom of three has plenty of reason to flash those perfect pearly whites. And while many might assume that the iconic Pretty Woman star considers her accomplishments in film to be her greatest life achievements, she recently revealed that her family of five is also what she considers her “dream come true.” Roberts recently sat down for a TV interview to chat about life as a working mom and self-described homemaker (and knitter!), who values the precious time she spends with her husband and three teenagers. She gushed about her 17-year-old daughter Hazel, who almost wore her Oscar-winning gown to prom and is super low-key when it comes to hitting up the red carpet eyeliner-free.

As a guest on CBS Sunday Morning, Roberts opened up about the happiness she finds at home. “When I’m not working, [being a homemaker] is my full-time job. It isn’t rainbows and kittens every day, but it does bring me a lot of joy.”

Along with 14-year-old Henry, Roberts shares twins Hazel and Finn with husband and cinematographer Danny Moder. The lovey-dovey couple have also been known to share a couple of lip-locking shots on Instagram (exhibits A & B).

The Ticket to Paradise star also shared quite a few sweet details about about her daughter, who seems really well-adjusted despite having such a famous mama. Roberts revealed that Hazel isn’t really into make-up, even on fancy red carpets at Cannes with her father.

“We were FaceTiming actually right before they went out. And she was lying on the bed, and I said, ‘What time is it? What are you guys doing?’ She goes, ‘Oh, Dad’s, you know, just putting his tie on. We’re getting ready to go.’ And I said, ‘Oh, are you ready?’ ‘Yeah.’ Like, she didn’t really look ready to me, you know, ponytail?” Roberts said.

“And I was, like, ‘Hmm, little eyeliner?’ She was, like, ‘I didn’t bring eyeliner, Mom, what are you talkin’ about?’ It’s, like, ‘Okay, yeah.’ I mean, what eyeliner? I mean, who needs eyeliner? Just Cannes! I mean, it’s just sweet, just the innocence. She’s just with her dad. It’s not about anything else,” she continued.

“She is one of a kind, that girl,” Roberts beamed.

The glass-ceiling-breaking actress has talked her own experience as a kid before too, explaining to Good Morning America how important it is for her to raise independent kids who are prepared for life. "Coming from the kind of childhood that I had, I raise my kids now — I don't want them to have to have some of the struggles that I had, but at the same time, you do need to know how to make your bed, and how to do your laundry and be able to make one meal. These are important life skills."

But of course when you’re Julia Roberts’ kid, there are some unquestionable perks, such as raiding your mom’s closet. Roberts also offered up a fun story about Hazel digging around her room for a possible prom dress. Turns out, she almost wore that unforgettable black-and-white vintage Valentino gown that Roberts donned to collect her Academy Award (spoiler-alert: it was too big).

Since Roberts admitted to being quite the expert stitcher, maybe she decided to knit Hazel a dress that fit instead?