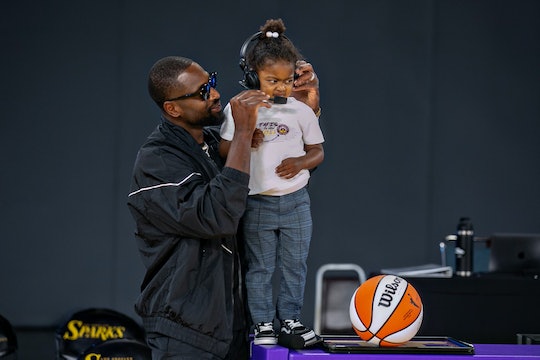 Kaavia James is truly Dwyane Wade’s daughter, indeed. The retired NBA star and children’s book author showed just how silly they could be together in a sweet new Instagram post and proved, once again, that she is his mini-me.

Wade, 40, and Kaavia, 3, posed for a series of photos, including a silly one that was shared on the toddler’s Instagram page. And in another photo, Kaavia affectionately leans on her dad's chest and the final shot is a solo one of little Miss James showing off her gold heart necklace and earrings. “I stole his ENTIRE face. I meannnnn, can you take us!!? #Twinning,” the caption reads. The photo’s location adorably reads, “My Home With My Twin.”

Kaavia is the youngest daughter of Wade and Gabrielle Union. The two are also parents to son Zaire, 19, daughter Zaya, 14, and son Xavier, 7, from Wade’s previous relationships.

The toddler has over 1.9 million followers on her Instagram, which is monitored by her parents. It’s no surprise she has such a big following, as Wade touched on during a recent interview with Ellen DeGeneres. “It's this thing about Kaavia where people have started following her, the captions on her photos, it kind of says everything we wanna say, we just can't say it,” the Shady Baby author shared on the Ellen DeGeneres Show. “But she has her own swag and personality. Through the pandemic she kept all of us going and having something to look forward to.”

Wade is not the only parent Kaavia twins after from time to time. She’s also a big fan of matching with mom, including her hair. In January, the Being Mary Jane actress posted an Instagram video of Kaavia wearing one of her wigs. And for the Cheaper By The Dozen movie premiere in March, the two matched in black-and-white sequined dresses by Altuzarra.

Kaavia also likes to twin with her friends. Recently, she teamed up with her BFF Crosby Sparrow, the 3-year-old son of Union and Wade’s friends, Nicole Lyn and Chad Easterling, for a matching lion and flower print photo op for the kid’s brand, AKWA Baby.

She might be 3 years old, but it’s safe to say that it’s Kaavia’s world and we’re all just living in it. And that, of course, includes her parents. As Wade told Romper in February 2022, “It all revolves around Kaavia,” even when she steals your whole look...