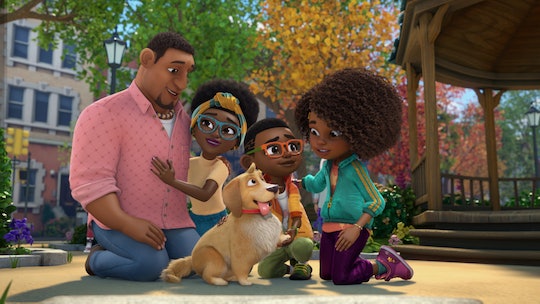 Your Kids Can Join The 'Karma's World' Virtual Release Party

“It’s about a girl who wants to bring positivity to the world... ”

Dropping next month is a new animated series for kids on Netflix filled with music and life lessons. Karma’s World is about a little girl who wants to use her talents to change the world. Created by multi-award-winning rapper, actor, producer and philanthropist Chris ‘Ludacris’ Bridges, the animated show was inspired by his oldest daughter Karma and has been years in the making.

Karma's World Is A Coming-Of-Age Story

The series is a coming-of-age story about a 10-year-old Black girl named Karma Grant, who wants to use her music to change the world. “It’s about a girl who wants to bring positivity to the world through her music, and each episode draws on real-life situations faced by kids today,” the Fast and Furious star said in a press release about the upcoming series. “We see Karma use her voice to help her family, friends, and community, demonstrating the power young people have to create change.”

Karma's World will tackle topics such as friendship, self-esteem, discrimination, body positivity, and other issues preteen girls could wrestle with.

You Can Stream Karma's World In October 2021

The series, which will have 40 episodes that are each about 11 minutes long, drops on Netflix on Oct. 15.

On Oct. 13, there will be a worldwide virtual premiere party, including the world premiere of a new music video. Attendees can RSVP here by Oct. 10. A full episode of Karma’s World is also on Youtube.

In addition to a star-studded cast, the cartoon series will also have an official soundtrack. “The series serves up sophisticated beats, impressive rhymes, and straight-up catchy choruses all the while addressing important topics and themes in each episode,” Ludacris said in a statement via Vibe magazine. “The music on Karma’s World is not just for kids, I know for a fact that whole families will be singing and rhyming along.”

The character Karma is described as “smart, resilient, and deeply empathetic.” They’re characteristics that the rapper hopes will empower young Black girls. “I hope this series will show kids that there are many ways to overcome difficult situations,” Ludacris told Deadline. “This show is going to move hip hop culture forward and show young girls that they have the power to change the world. This project has been a long time in the making, and I can’t wait to bring Karma’s World to the entire world.”

“I’ve had a lot of accomplishments in my life, but everything that I’ve experienced seems to have led up to this point to where I can leave a legacy for all my daughters,” Bridges told Deadline. “Karma’s World is one of those legacies.”

This article was originally published on Sep. 29, 2021