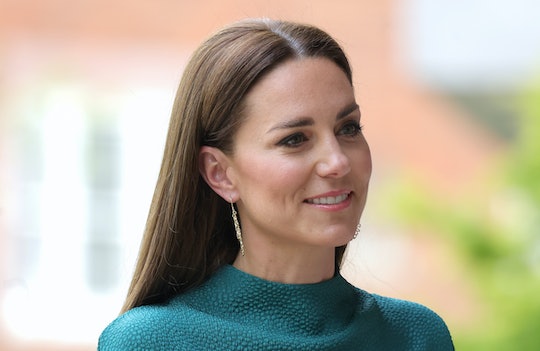 The Duchess of Cambridge has never shied away from talking about mental health. She and husband Prince William have made it one of their royal priorities to end the stigma around mental health awareness in the UK through their Heads Together charity, but recently Kate Middleton has gotten more specific. The mom of three is calling attention to maternal mental health in a new video announcing her latest royal patronage.

On Friday, Middleton announced that she had been named royal patron of Maternal Mental Health Alliance, a UK-based charity that works to ensure moms get the mental health support they need during pregnancy and as new moms. “We all know that pregnancy, childbirth and the first months and years of a child's life can be hugely demanding,” Middleton said in a video shared on social media. “Parents often feel lonely and overwhelmed by these early years. Around 20% of women in the UK are reported to experience perinatal mental illness. Sadly, we also know that many more are suffering in silence."

“No one is immune to experiencing anxiety and depression during this time,” she added. “It is crucial, therefore, that all those who might be struggling are given the right support at the right time, so that they're able to share these feelings without fear of judgment and can access the information, care and support they need to recover.”

This is not the first time Middleton, who is mom to 8-year-old Prince George, 7-year-old Princess Charlotte, and 4-year-old Prince Louis with Prince William, has spoken about maternal mental health. Breaking from the royal tradition of stoicism, in 2017 Middleton spoke out about she, herself, had struggled as a new mom. “Becoming a mother has been such a rewarding and wonderful experience,” Middleton said at the time. “However, at times it has also been a huge challenge — even for me who has support at home that most mothers do not.”

She also spoke candidly about how lonely new motherhood can be in 2020 when she visited Wales, where she lived when Prince George was first born and Prince William was working as an air rescue pilot. “It was the first year and I’d just had George — William was still working with search and rescue — and we came up here and I had a tiny, tiny baby in the middle of Anglesey. It was so isolated, so cut off. I didn’t have any family around, and he was doing night shifts.”

It’s easy to dismiss Kate Middleton as one of the most privileged women in the world, a future Queen Consort. But she’s using that privilege, that platform, to try to help. Help moms who feel alone to know they’re most definitely not alone. And that is really something.