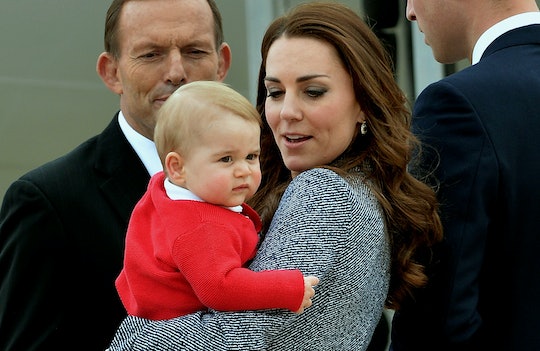 Even Kate Middleton Felt Isolated As A New Mom, She Says

Kate Middleton might be a senior member of the royal family with a supportive husband in Prince William and a legion of helpers at her disposal, but that doesn't mean her early years as a mom were easy for her. On the contrary, in fact. During a recent visit to Cardiff in Wales, Kate Middleton got honest about new mom isolation, and it's a powerful reminder for other new mothers out there that everyone struggles. Even someone like the Duchess of Cambridge.

Middleton and her husband Prince William are parents to three adorable children, 6-year-old Prince George, 4-year-old Princess Charlotte, and 20-month-old Prince Louis. Ir's a busy life for the Cambridge family, with the group of them splitting their time between Kensington Palace and their country home of Anmer Hall in Norfolk County, according to Woman & Home. The two older children go to school at Thomas's Battersea in London, and life appears to be generally pretty full and happy for the group of them. But, as Middleton noted during her visit to Cardiff on Wednesday, her life was quite different when she first welcomed her oldest child, Prince George. Back in 2014 the couple were living in the small village of Anglesley, Wales, where Prince William was working as an air ambulance pilot for the Royal Air Force, per North Wales Live. His job had him working overnight shifts, leaving Middleton home alone with their son. And she has never forgotten just how alone she truly felt.

As she explained during her speech at the Ely and Caerau Children's Centre (where parents can go for early years support), as per People, "It’s nice to be back in Wales. I was chatting to some of the mums. It was the first year and I’d just had George — William was still working with search and rescue — and we came up here and I had a tiny, tiny baby in the middle of Anglesey. It was so isolated, so cut off. I didn’t have any family around, and he was doing night shifts. So... if only I'd had a center like this.”

The early days of motherhood can be surprisingly lonely, and as a 2017 article in Psychology Today noted, it's not an issue many women expect to face... perhaps because it's not always openly discussed. Which is why it's so important for moms like Kate Middleton who are high profile and so often touted for seeming to have it "all together" to share their own stories of being lonely. Feeling isolated.

Because her openness might make one mom reading this feel slightly less alone.