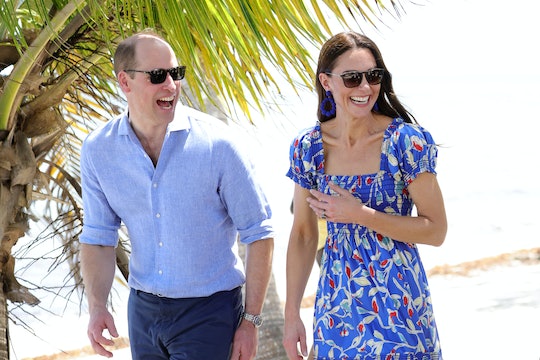 Kate Middleton and Prince William know how to balance work and play. Just recently, the royals let loose in Belize, dancing with the local community on a sunshine-filled day. The Duke and Duchess of Cambridge were all smiles as they moved their hips to the beat of live music in the beachside village of Hopkins and lucky for us, it was captured on video.

The 18-second clip captured by Roya Nikkhah, royal editor of The Sunday Times and posted to Twitter March 20, is enough to make you research flights to the Caribbean for your next vacation. The footage shows locals surrounding the couple, as Middleton twirls her dress and Prince William sways his hips and spins a local woman around. The hardworking couple left their three kids — Prince George, 8, Princess Charlotte, 6, and Prince Louis, 3 — at home and it’s clear they are genuinely having a great time.

Right now, Middleton and Prince William are in the Caribbean on official royal business, as they are representing Queen Elizabeth II for the Platinum Jubilee on a visit to Belize, Jamaica, and The Bahamas. The first part of their tour takes place in Belize, where Middleton and Prince William are spending time visiting historic Mayan sites, celebrating the Garifuna community, and exploring the country’s biodiversity.

After dancing with Prince William, local festival organizer Laura Cacho told BBC, “They were shaking their waists like nobody’s business.” Later, she added that Prince William had “beautiful rhythm” and Kate Middleton “definitely has Garifuna culture in her.”

The Duke and Duchess of Cambridge’s official Twitter account also posted a video of their dance party, with the caption: “Wow! What a welcome.” The video also shows them touring the beach, talking to little ones, and clapping along to the music. The caption continued, “It was privilege to spend time with the Garifuna community and experience some of their traditions, here in Hopkins. Thank you Mama G for hosting such a special event!”

This isn’t the first time Middleton and Prince William have been spotting dancing. In 2016, the Duke and Duchess of Cambridge attended a Bihu festival in the Kaziranga National Park in Assam, India, where they clapped along to local music. During the event, an adorable 3-year-old boy captured their attention with his impressive and energetic dance moves — even attempting to dance on Kate Middleton’s foot at one point! — as reported by Rebecca English for The Daily Mail. The royal couple, who had two young children at the time, were laughing and enjoying themselves during the event.

Also, in 2017, Middleton, who was pregnant at the time, twirled in a pink dress with Paddington Bear at Paddington Station in London. Years later, they’re carrying on a long tradition of royals making moves on the dance floor.

More Like This
Kate Middleton Explains Why Her Kids Couldn't Attend The Top Gun: Maverick Premiere
Meghan & Harry Celebrated Their Anniversary As A Family Of Four For The First Time
Why Prince Harry Feels Lucky To Be A "Father With A Platform"
Prince Harry & Meghan Markle Could Take Us Inside Their Home For A New Docuseries