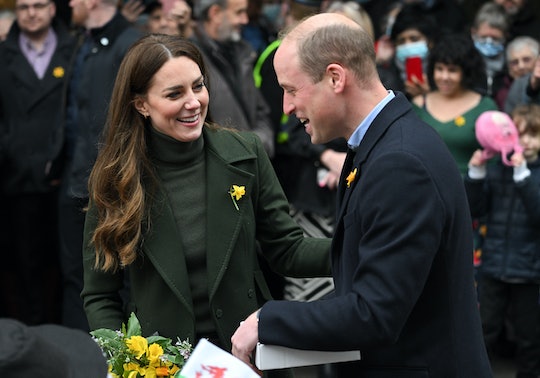 The secret to a long-lasting, happy royal marriage is apparently the same secret to any marriage — a sense of humor. The ability to tease a little and even take a little teasing every now and again. At lease that’s what seems to do the trick for the Duke and Duchess of Cambridge. Nearly 11 years after they got married and more than 20 years since they first started dating, they’re still having fun together. Because they love to tease each other, even when they’re at official royal functions like a recent tree-planting event. Kate Middleton subtly poked fun at her husband, and he obviously loved it.

The parents of three visited Wales for a royal tour in honor of St. David’s Day in early March, and one of their stops was the town of Blaenavon. Middleton and Prince William stopped in the town to plant trees for the Queen’s Green Canopy initiative, and when it came time for Prince William to plant his tree Middleton made sure he wasn’t just phoning it in.

“William, you’ve missed a bit!” she called out, as People reported, pointing to the ground. To be fair to Prince William, he’s planted his fair share of trees on royal tours over the years.

To be fair to Kate Middleton, he really should be an expert by now.

Prince William has certainly done his fair share of teasing in the past as well. Most recently when the couple, who are parents to 8-year-old Prince George, 6-year-old Princess Charlotte, and 3-year-old Prince Louis, were visiting the Clitheroe Community Hospital. There Middleton met an especially cuddly baby and Prince William told his wife, “Don’t take her with you!” In the past, he has teased her about her cooking, saying it’s the reason he stays “so skinny,” while she in turn ribbed him about his habit of eating pizza on the sofa.

For these two, it’s actually about more than just teasing each other. It’s about not taking themselves so seriously, something that must be a constant battle considering the world in which they live. They were recently called “Kate and Will” by a royal fan and didn’t say a word about it, because they’re just happily living their lives. Having some fun hanging out together, doing their best to keep that spark alive, perhaps. It seems to be working.

More Like This
Kate Middleton Explains Why Her Kids Couldn't Attend The Top Gun: Maverick Premiere
Meghan & Harry Celebrated Their Anniversary As A Family Of Four For The First Time
Kate Middleton Keeps Getting “Broody” Around Adorable Babies
Why Prince Harry Feels Lucky To Be A "Father With A Platform"