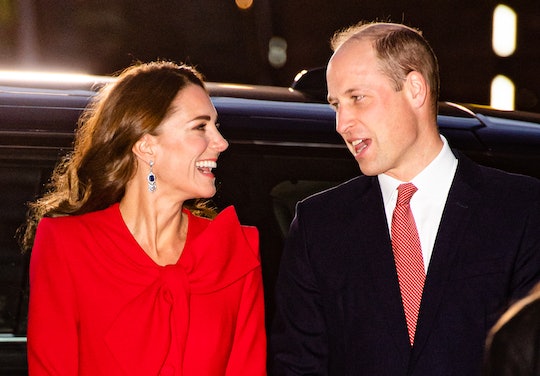 The more we learn about the private life of Kate Middleton and Prince William, the more relatable they become. Yes, they are the duke and duchess of Cambridge and will someday become the king and queen consort of the United Kingdom. But that doesn’t matter when Prince William is eating his pizza on the couch. Future king or not, Middleton will not abide messy pizza on her couches. And I think we can all relate.

In 2018, the parents of three were visiting an air force base in Cyprus to help open a new recreation facility when Prince William caught a look at the sofas. It seems they were light-colored, and he noted that people should consider “keeping the pizza off the sofas,” per Good To Know. Middleton immediately called out her husband, saying “You’re a nightmare with that!”

It probably doesn’t help that Middleton loves to make pizza with 8-year-old Prince George, 6-year-old Princess Charlotte, and 3-year-old Prince Louis. “I've done that with George and Charlotte — making pizza dough. They love it because they can get their hands messy,” she told Mary Berry in 2018.

So really, she only has herself to blame if the sofas become a mess.

To be fair, Prince William does make up for his pizza habit by being thoughtful of his wife’s needs in the evenings after the kids go to bed. He reportedly makes her a lovely little gin and tonic once everyone is tucked in for the night, which is perfect for the busy mom’s preferred evening activities. Middleton reportedly loves to chill out after the kids are in bed by watching makeup tutorials on YouTube and doing some online shopping.

That is, of course, when she is not attending glamorous movie premieres or going out to other equally fabulous functions alongside her husband. While the couple certainly look happy to be out doing their part to keep up appearances as chic royals on the town, it sounds as though they vastly prefer their nights at home. Hanging out at their country home or perhaps in their apartment at Kensington Palace, perhaps watching television, enjoying a cocktail together, and eating pizza with the kids.

Not on the sofa, though. Middleton has made her feelings about that abundantly clear.