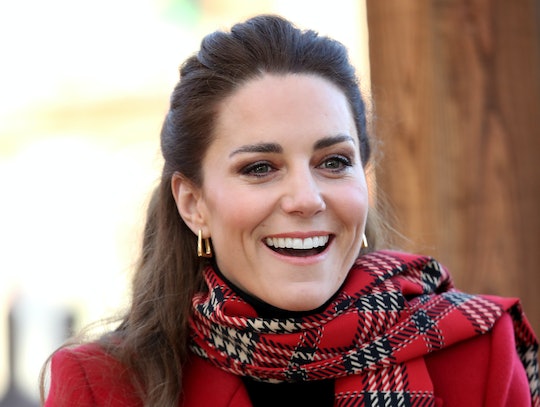 Kate Middleton Is Every Mom After Her Kids Go To Bed

The Duchess of Cambridge has a very relatable nighttime ritual.

What do you think the evenings of a future queen might look like? If you've watched every episode of The Crown like me, you might imagine dressing for dinner in gowns and elbow gloves, tiaras optional. Or, if the family is on holiday, returning late from the hunt to a castle full of servants. Apparently this is not exactly what Kate Middleton's nighttime routine after her kids are in bed seems to be. A family friend gave People the run down on what a visit to the Duchess of Cambridge's country home of Anmer Hall in Norfolk County might consist of, and it's a whole lot more laidback than you might suspect.

Middleton has spent much of 2020 staying at Anmer Hall with her husband Prince William and their three children, 7-year-old Prince George, 5-year-old Princess Charlotte, and 2-year-old Prince Louis. More time than the Cambridge family might have normally spent away from their London home of Kensington Palace due to the COVID-19 lockdown in the United Kingdom. The family reportedly lives a relatively relaxed life at Anmer Hall, according to an unnamed friend of Middleton's, who told People, "At the end of the day, she’s in training to be a future Queen, but honestly you would never know it. If you go round to her house, you get a cup of tea, and it’s often William who makes it! It’s a lovely, welcoming house, not a fancy, stuffy palace in any way.”

That same source shared a bit of insider information about what the busy mom does to entertain herself after the kids are in bed. According to People, she checks out YouTube makeup tutorials and shops online.

This is a royal household I can really get behind.

Both Middleton and Prince William have spoken openly in the past about their desire for as normal a home life as possible for their kids, and they lead by example in their own lives. During COVID-19, the mom of three took over homeschooling her kids, baked with them, and even reportedly gave all of them haircuts. Perhaps using tips she learned in those YouTube tutorials.

The Duchess of Cambridge is a future queen with money and castles at her disposal, and yet she sounds pretty happy hanging out doing exactly what the rest of us are doing after the kids go to bed. There is real comfort in that.