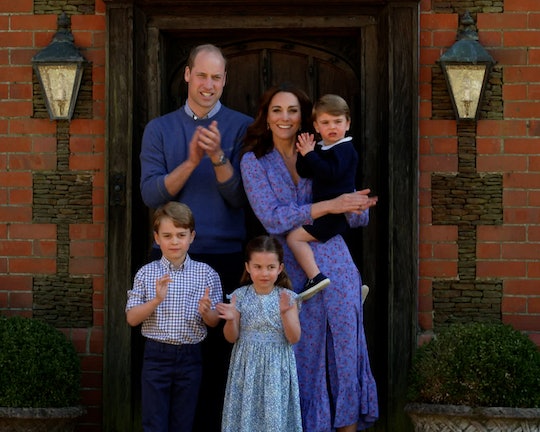 Royals, they're just like us. And especially right now. In fact, rumor has it that Kate Middleton is also cutting her kids' hair at home. What's more, apparently it's not even a new skill she had to develop to deal with living in quarantine during a pandemic or anything.

Middleton and her husband Prince William are currently living at their country home of Anmer Hall in Norfolk County, presumably with limited staff due to social distancing measures. And, like so many other moms, Middleton, who shares 6-year-old Prince George, 5-year-old Princess Charlotte, and 2-year-old Prince Louis with Prince William, has been having her share of "ups and downs" during lockdown.

"It's been ups and downs, like lots of families self-isolating," Middleton said during an April video interview with the BBC. "George is much older than Louis is ... but they are aware. You don't want to scare them, and make it too overwhelming. But I think it's appropriate to acknowledge it in simple ways and in age-appropriate ways."

One thing she doesn't have to worry about is keeping her kids' hair looking tidy. A palace source told The Sun on Wednesday that Middleton has been trimming Prince George and Princess Charlotte's hair herself. "Kate would certainly trim George and Charlotte's hair as she is very competent and they are used to home haircuts," the source told The Sun. "George’s is easy. Charlotte likes her hair off her face and so it's long enough for a mini pony tail. They both have easy hair to cut."

Fortunately, Middleton has a little training in this area from her own mom, Carole Middleton, who reportedly "taught both Kate and sister Pippa how to cook and cut children’s hair. To them, it is no big deal," the source told The Sun.

It seems the royal kids are pretty accustomed to getting their hair cut at home, or at the palace as it were. Middleton's own royal stylist Richard Ward regularly comes to Kensington Palace to trim their hair, according to Grazia Daily, and Middleton is reportedly using his at-home kit to do the job herself these days, as per The Sun.

The Duchess of Cambridge seems to have the tools to fare pretty well during quarantine with kids. Despite the fact that she's been keeping up with her royal duties, she's been homeschooling her kids, cutting their hair, and generally getting things done. Classic mom stuff.