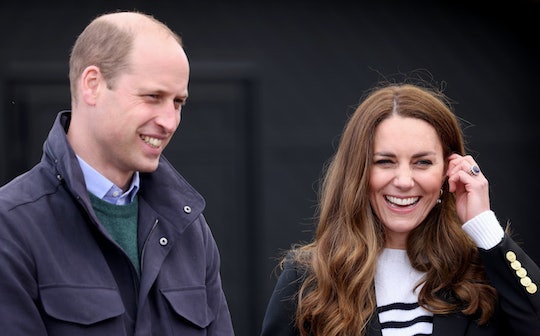 Her evening gin-and-tonic from the future king.

Kate Middleton leads a charmed life. She’s the Duchess of Cambridge, first off. She’s married to the man who will someday be the King of England, there’s that too. She has several homes, including a palace here and there. Her tiara collection is... well, it’s a tiara collection so that pretty much says it all. And best of all, she has a husband who truly understands how to be a supportive partner. According to a family friend, Prince William apparently brings her a cocktail at night after the kids go to bed, and it sounds like a match made in absolute heaven.

A family friend told People that the Duke of Cambridge, who I would like to remind you is second in line to the throne, has a habit of being a bartender for his wife at the end of a long day. “William will bring Kate a gin-and-tonic,” the family friend explained, noting that the cocktail comes after 8-year-old Prince George, 6-year-old Princess Charlotte, and 3-year-old Prince Louis have been tucked in for the night. “They look after each other, but in different ways.”

For her part, Middleton tends to lean towards an ordinary life with her husband and kids despite being a royal. Clearly she enjoys a cocktail with her husband once the kids are in bed, but she’s also known to unwind at the end of a long day by watching makeup tutorials on YouTube and getting in some online shopping.

Kate Middleton gets a nice cocktail from Prince William after the kids go to bed.

The couple are a real team as parents. Both of them do school drop-offs with their kids, and they’re so normal that Middleton will even be a bit late like a regular mom. Wearing a ponytail and everything. Sure, the couple have nanny Maria Borrallo, who has been with them since Prince George was a baby. But this friend tells People that Middleton steadfastly remains a hands-on mom and “runs things at home with the kids and the schedules. She is hugely involved in every single part of their day."

Raising three children alongside her royal duties and preparing to become Queen Consort someday. No wonder Kate Middleton needs that gin-and-tonic at the end of the day.