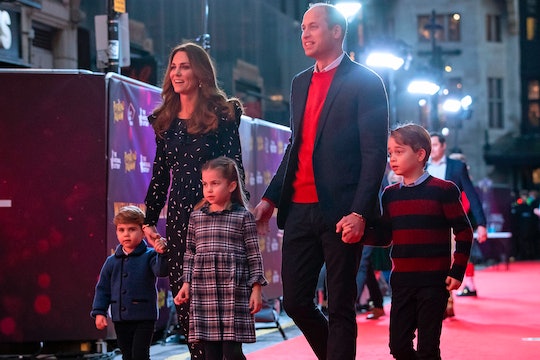 Sometimes you’ve just got to get away.

Kate Middleton and Prince William recently took flight with their three kids, 8-year-old Prince George, 6-year-old Princess Charlotte, and 3-year-old Prince Louis, for a half-term holiday — one of the first holidays the Cambridge family has reportedly enjoyed outside the United Kingdom since the onset of Covid-19. While details about their destination remain thin on the ground, reports have circulated that the Duke and Duchess of Cambridge may have broken royal protocol to go on holiday as a family. Here’s hoping they don’t get grounded by Queen Elizabeth.

The entire Cambridge family was recently spotted at Heathrow Airport with their long-term nanny, Maria Borrallo, getting ready to board a flight. Paparazzi photos taken of the family showed the Cambridges grabbing their bags from their car, including backpacks for the kids, just like any normal family. Except in the case of this particular family, they were breaking royal protocol by traveling, as it seems, together.

Senior members of the royal family are not supposed to travel together in the unlikely event of a tragedy like a plane crash. Perhaps especially when there are members of the family who are in direct line to the throne, like Prince William and all of his children.

Prince William and Kate Middleton took the kids on holiday.

The family may have received special permission from Queen Elizabeth to travel together; she has given the family permission to do so in the past, after all, starting with Kate Middleton and Prince William’s royal tour of Australia in 2014 with then-baby Prince George. "They had to ask the Queen for permission, but she said yes," the royal press office told BBC's Newsround at the time. "While there is no official rule on this, and royal heirs have traveled together in the past, it is something that the Queen has the final say on."

Queen Elizabeth has been ill recently, spending the night in a hospital for observation and canceling a visit to Glasgow, Scotland for a climate summit. As thoughtful members of the family, Prince William and Kate Middleton would have presumably checked in before leaving on holiday. Now all that’s left is to wonder where they’ve gone. Anyone else hope it’s Disney World?