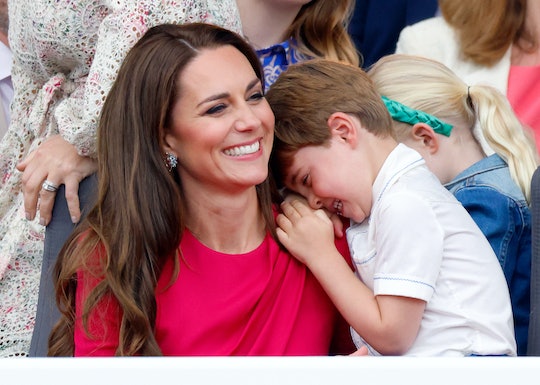 Its’s a problem so many parents can relate to, especially when their youngest hits a certain age. Kate Middleton is struggling to see her youngest son Prince Louis as anything beyond being her baby. Now that he’s 4 years old and getting bigger all the time, she’s finding it difficult to shift the way she sees him. And honestly, we all feel the same way.

The Duchess of Cambridge was visiting London’s largest baby bank network, Little Village’s Hub in Brent, and naturally conversation turned to her own role as a mom. “I keep thinking Louis is my baby,” she said at the time according to People, “but he’s a proper boy now.”

The whole world got the chance to see 4-year-old Prince Louis as a “proper boy” along with his 7-year-old sister Princess Charlotte and 9-year-old brother Prince George at the Platinum Jubilee last month to celebrate Queen Elizabeth’s 70 years on the throne. The precocious little boy seemed to be having a better time than anyone, dancing and goofing around and honestly just living his best life.

But when he needed to quiet down, royal fans also got a glimpse of him as a bit of a baby. Curling up to his mom when he was tired. And she clearly loved it.

Prince Louis could well remain the baby of the family, as Middleton and her husband Prince William don’t seem to be contemplating having a fourth child beyond the Duchess of Cambridge’s odd “broody” moment, which Prince William seems to shut down at every turn with a well-placed dad joke.

Fortunately for the whole family. Prince Louis is reportedly a real little entertainer who seems to love making people laugh. Especially when he has a worldwide audience like the Platinum Jubilee. “He's a cheeky monkey — a typical third child," a royal source told People at the time. "It's nice that the world got to see him enjoying himself."

As for Kate Middleton, other parents can probably relate to trying to find the balance between seeing your youngest as a baby no matter how old they are. It’s sort of the way it goes with the baby of the family. And Prince Louis doesn’t seem to mind one bit.