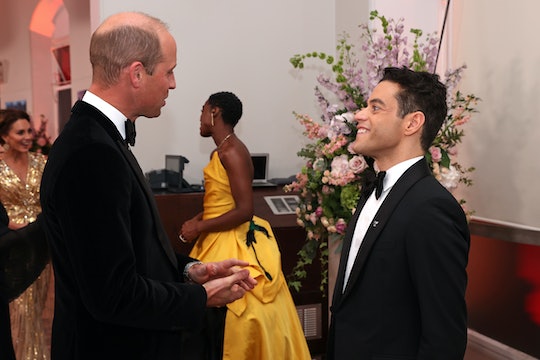 Answering “How are you?” is just a little complicated.

Academy Award winning actor Rami Malek could one day add royal babysitter to his résumé. When the actor first met the royal couple in 2019, he spoke to them about how life was with three kids, one of whom was just a baby. And, according to Malek, he offered to babysit the Cambridge kids to give the busy parents a night off and the Duchess of Cambridge was apparently “taken aback” by his proposition.

During an appearance on Jimmy Kimmel Live! on Tuesday, the No Time to Die actor revealed that he met with Middleton and Prince William during the film’s premiere last month. But this wasn’t the first time he got to speak with the royal couple. He met the Duke and Duchess of Cambridge for the first time at the 2019 BAFTAs where he won the Best Actor award for his role in Bohemian Rhapsody. Malek told Jimmy Kimmel that when he talked to Middleton at the time, he commented that she must be exhausted, which confused her a bit, it seems.

“I think I caught her off guard for a second,” he said. “And, you know, had that look of — in the most elegant, professional, royal way — ‘Yes, it’s a lot having a kid.’”

Middleton gave birth to their third child, Prince Louis, in April 2018. Between making their many royal appearances and raising their three kids, the royal couple surely has their hands full, as Malek presumed. And in any case, if they ever need an extra hand, they can call on Malek for some help. He told Kimmel that he offered them his babysitting services, but they didn’t seem too eager for his assistance.

Although Prince William and Middleton have not taken Malek up on his offer in the time since then, never say never.