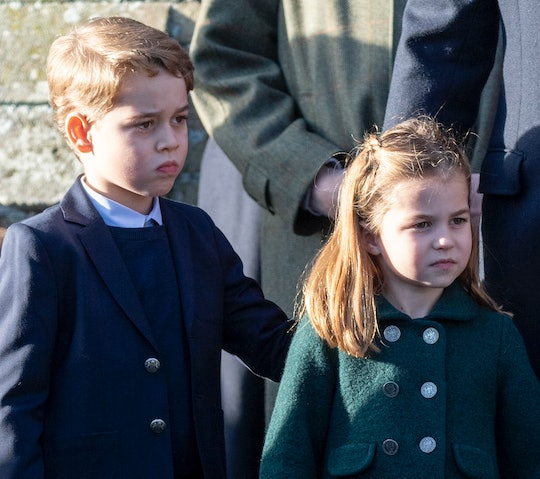 It's Official: All The Royals Kids Have Chickens

George, Charlotte, and Louis have gotten into the chicken game, just like their cousin Archie!

When Oprah Winfrey interviewed the Duke and Duchess of Sussex back in March, there were many shocking revelations. Including the fact that 2-year-old Archie has a chicken coop called “Archie’s Chick Inn.” A little royal with a chicken coop, who has ever heard of anything so adorable? Well, it turns out he’s not the only royal kid with a chicken coop. His Cambridge cousins have one as well, and their mom Kate Middleton thinks taking care of the animals is “like therapy.” A modern monarchy indeed.

Middleton and her husband Prince William were on a royal tour of Northern Ireland on Wednesday and made a stop at Ulster University’s Magee Campus’s petting zoo. During their visit, Prince William told students who were on hand that the family has acquired “lots of chickens” during lockdown, as reported by The Mirror. In fact, Middleton explained that the family has “had lots of animals during lockdown.”

“During lockdown, animals are often like therapy,” she said. Now I’m picturing horses and goats and donkeys all living side by side at the family’s country home of Anmer Hall in Norfolk County. Presumably they aren’t keeping chickens at Kensington Palace, although if they are we would love to see it.

As it sounds like the Cambridge family is new to the world of keeping chickens, perhaps the couple are discussing tips with the Sussex family during those Zoom chats they’ve reportedly been having in recent months. They did start the ball rolling over the winter in California, after all.

Middleton herself comes from a family who puts great emphasis on spending time outdoors with their children. Her mother Carole Middleton admitted back in May that she likes to see her grandchildren, including 8-year-old Prince George, 6-year-old Princess Charlotte, and 3-year-old Prince Louis, getting “a bit muddy” in the garden with her. She even sets up activity stations ahead of time so the kids can get right into it.

Of course, the royal family themselves have long been fond of getting outside with their animals. Queen Elizabeth’s love of horses and her adorable corgis is well documented, and the family tends to spend their summers at Balmoral Castle in Scotland communing with nature.

Chickens, however, appear to be a new thing. They’re great for kids as pets because they’re fun and easy and encourage them to be responsible. And let’s not forget the fresh eggs. Now all we need to know is what the Cambridge kids’ chicken coop is called. It better not just be called the “Cambridge Chicken Coop,” they need to get creative here.