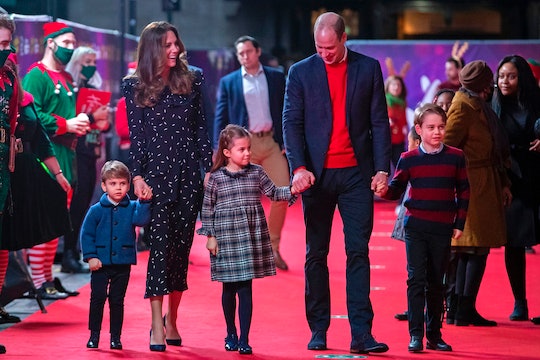 During a visit to a special pantomime performance at the National Lottery’s Pantoland at The Palladium, Prince William and Kate Middleton walked the red carpet with Prince George, Princess Charlotte, and Prince Louis by their sides. It was a big first for the whole family, and no big surprise the kids took to it like old pros. Even 2-year-old Prince Louis, who wore a button down jacket that can only be described as smashing in my opinion.

The Duke and Duchess of Cambridge are newly returned from a three-day Christmas tour by train through the United Kingdom, where they spent time visiting with essential workers who have kept the country going during the coronavirus lockdown. After being away for a few days, they presumably missed their children and wanted to spend some time with them. What better way to do that than a visit to a festive pantomime performance where they can all walk the red carpet together?

Public outings with their children have been almost nonexistent in 2020, so it was a real delight to see Middleton and Prince William walking the red carpet on their way into Pantoland with 7-year-old Prince George, 5-year-old Princess Charlotte, and their little brother holding their hands.

Well, mostly holding their hands. Princess Charlotte is seen shaking off her father's hand as they walk. Typical 5-year-old, won't even allow the future King of England to hold her hand.

The Cambridge family enjoyed a lovely day out together.

Prince Louis, however, looked a little bit stunned by all of the cameras. Which makes sense considering he has spent most of the past year in lockdown at Anmer Hall, the family's country home in Norfolk county. Imagine going from isolation in the country as a toddler to walking the red carpet as a member of the royal family. That's some kind of culture shock.

The special pantomime performance was held as a way to thank essential workers who have helped communities thrive throughout the pandemic over the past year, and the Duke of Cambridge gave a short speech at the outset to thank those workers in the audience as well.

As for the royal kids, they've all done their part to thank essential workers and volunteer in the past. Like when they all showed up to "clap for carers" back in the spring, or when Princess Charlotte and Prince George helped their dad deliver food parcels to isolated seniors in June.

Those royal kids walking the red carpet and making the world the better place. That's it. That's everything.