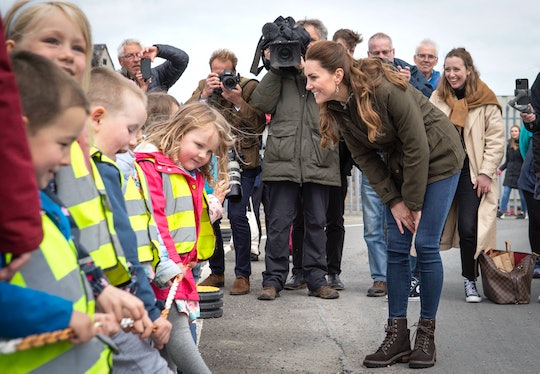 The Duchess of Cambridge always shines brightest when she is engaging with little kids, even when one of those kids is asking her is she is a “prince.” As ever, Kate Middleton laughed and took it in stride and genuinely looked like she was having a great time.

Middleton and her husband Prince William were visiting the island of Orkney as part of their tour of Scotland recently, and of course there was lots of fanfare surrounding their arrival. Not the least of which being a group of nursery school students who were waiting patiently to greet the Duke and Duchess of Cambridge. As a mom of three herself to 7-year-old Prince George, 6-year-old Princess Charlotte, and 3-year-old Prince Louis, Middleton always seems to gravitate towards the youngest royal fans around. Her visit to Orkney was no different.

The group of kids were all excited to chat with her, with one little girl telling her she had watched Middleton’s wedding on television. Middleton, who clearly understands what kids want, replied, “I’m sorry I’m not wearing my dress today.”

Kate Middleton had to tell a little boy she was not a prince.

Middleton is rarely referred to as a princess. She is styled as Her Royal Highness, the Duchess of Cambridge, and when her husband someday becomes king she will presumably be Queen Regent. But she actually was given the title Princess William of Wales on her wedding day, so she wasn’t lying to the small children.

The Duchess of Cambridge tends to be the most open when she is speaking with children. When she spoke to a young girl named Mila as part of her “Hold Still” photo campaign in early May, for instance, she told her all about little Prince Louis being “so big now.” She also told Mila, “he’s very quick running around and he’s on his little scooter as well. He’s very quick. I can’t keep up with him.”

Prince or princess, these moments are too pure.