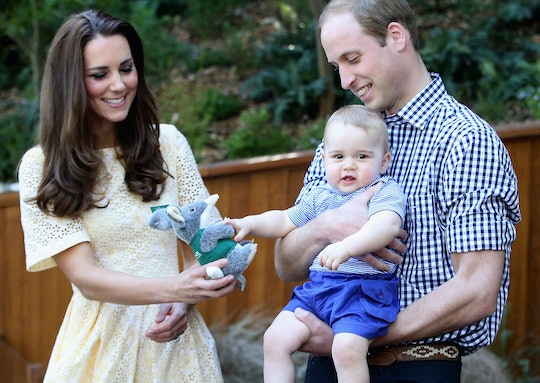 It’s one of his middle names.

While it’s hard to imagine him as anything other than Prince George, a royal expert has claimed that Kate Middleton might have had other ideas about the name of her firstborn child.

Before she gave birth to Prince George in July 2014, the Duchess of Cambridge and her husband Prince William chose not to find out the sex of their baby, according to royal expert Katie Nicholl. Back in 2013, Nicholl wrote in Vanity Fair that it was, in fact, Prince William who wanted to wait to find out the sex of their first baby, but Middleton’s mother’s intuition was already kicking in. She “already suspected it was a boy,” Nicholl wrote for Vanity Fair. And even though the couple had not yet decided on a name for their first child together, she reportedly already had one in mind. That name was not George. It wasn’t even Louis, the name of the son she would later welcome in May 2018.

Middleton “had set her heart on the name Alexander” for the heir to the throne, Nicholl explained in Vanity Fair, and as we all know that did not really work out for her. Although it sort of did, as her oldest child’s full name is George Alexander Louis.

Prince George’s great-great-grandfather was King George VI, beloved father to Queen Elizabeth II, so it certainly makes sense that this name was chosen. As far as the middle name Louis, Prince William also has the name Louis as a middle name in honor of his father Prince Charles’ great-uncle Louis Mountbatten, who was assassinated in 1979. Alexander, on the other hand, is different. There has never been a British king called Alexander, and there doesn’t appear to be any real royal significance to the name. Perhaps a nod to the fact that Middleton had to give up her first choice for her son’s name and relented by using it as a middle name.

The tradition of naming royal children after other members of the royal family has been around for centuries. When Middleton welcomed her other two children, the tradition held. Princess Charlotte’s full name is Charlotte Elizabeth Diana, after her grandmother and great-grandmother, while Louis is Louis Arthur Charles, after his grandfather.

Queen Elizabeth is usually informed of the name prior to it being finalized, and when it comes to the heir to the throne, it would make sense that Prince George’s name would be considered significant. It might not be Alexander, but George is still a good name. The name of a king, both past and future, in fact.