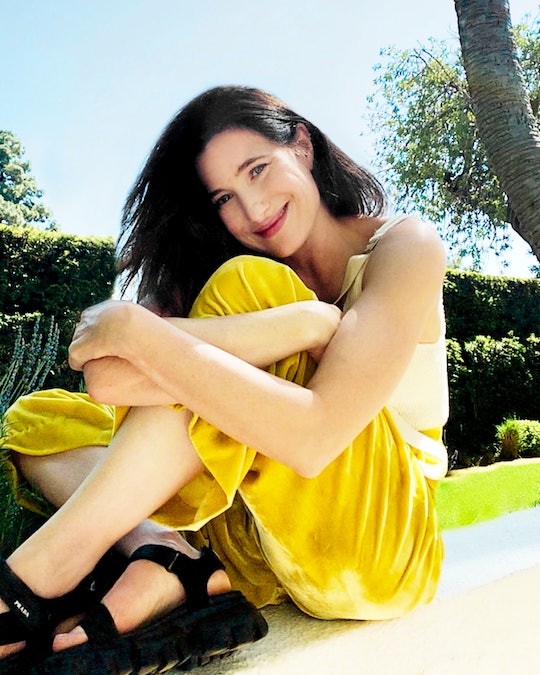 The beloved actress on pandemic parenting, what her kids thought of WandaVision, and how this strange year has changed her forever.

I know, in the logical part of my brain, that the real Kathryn Hahn is not one long mashup of her characters. That she didn’t spend her 20s working with her best friends at a magazine (like her character in How to Lose a Guy in Ten Days) before graduating to struggling with the banalities of marriage (Afternoon Delight), asking the big questions about faith and life (Amazon’s Transparent), and trying like hell to get pregnant (Private Life). Guys, I am a grown-up. I understand Bad Moms isn’t real. I furthermore recognize that Hahn isn’t an empty nester a la HBO’s Mrs. Fletcher, and that she’s not really doing a second-act career as an insidious, meddling witch (WandaVision).

I know all of this. And yet my heart — tricked by Hahn’s incredible acting skills, her grounded charm, and her knack for nailing universal life experiences with authenticity — believes she is all of these people, and feels like they exist. She gives me that oh good, my friend is here feeling, whenever she appears on screen. This apparently includes Zooms, judging from the Bachelor-level frequency with which I said “I love that” during our interview. We talked pandemic parenting, what her kids thought of WandaVision, and how this strange year has changed her forever.

She gives me that oh good, my friend is here feeling, whenever she appears on screen.

How are you doing, in this emerging-from-the-pandemic-shell time? What’s the state of affairs in your house like these days?

Kathryn Hahn: It feels like there is a little light on the horizon, for sure. We're doing a lot of organizing in our house. We're doing a lot of bagging up of stuff and doing a lot of putting away the sweaters and bringing out the other clothes. We're trying to clean the corners, make everything as clean as possible and just start fresh. Kids are still home right now at the moment. And so, we've got a year behind us, of being in that house all together, two dogs and foster cats.

When you think about that year — what do you think you might keep, parenting-wise, when it comes to the way you did things during the pandemic?

KH: There's definitely a feeling of being more present and that I would love to keep going. Somewhere in the middle of this whole year — I don't know if you've felt this as well — there was a feeling of being like, "OK, here's where we are." Of not [knowing] what the future was, and being able to just be totally present. That was a new feeling for all of us. I would love to have that, going forward. It goes so fast, parenthood, and it feels also like we got a little stolen, extra time with these kids at home. And as awful as it has been for them, because they want to be in school, and I cannot wait for that to happen for them, there has been something very tender about just making a snack for them and all of that stuff.

So it’s kind of nice to just be like: There’s nothing to be done. You just be a kid. I’ll just be your mom.

Right, and so much of parenting is typically about the future — you have to do this this year so you can get to that level next year — it all just got wiped away.

KH: It got wiped away. All of that expectation and all of that anxiety just went away. That is such a great lesson, because I think that there was so much agita about the future. We just put that on them, without realizing how much we put on these little people. So it’s kind of nice to just be like: There’s nothing to be done. You just be a kid. I’ll just be your mom.

So we really loved watching WandaVision through the lens of motherhood. I'm wondering if you thought a lot about motherhood in a new context as you were working on the show.

KH: It hit me when we had our read-through for the finale that the whole show was kind of an allegory for parenthood. That the hex that she was creating was like trying to hold onto your children when it’s like, it's impossible. It just made me want to cry, that idea that you have to let them go. That was one thing Wanda’s powers didn’t have control over: They were going to grow up. They needed to learn about grief, they needed to learn about dying. There were certain things she wasn’t in control of, as powerful as she was. That was really, really moving to me.

I read that you got to watch it with your kids, which is cool. Did they know the full arc of your character going in, or were they surprised?

KH: They knew a lot of it. My daughter was able to come in for some fittings of the big [penultimate episode] dress and she was really excited to hold on to that secret. And to her credit, she really did. I wasn’t home to watch that episode, I was working, so I wasn’t there when my family saw the finale. But I came home to a note from my daughter saying “You’re such a badass, I’m so proud of you.” I have it in my closet. I’ll hold on to that forever.

The Agnes/Agatha reveal was such a huge part of the fun of the show — was there a part of the process for you that you loved the most, looking back?

KH: I mean, there are so many. This checked off all the boxes, I have to be honest. There were a couple of lines in the last two episodes that were pretty fabulous. I love: “There's always going to be torches and pitchforks for ladies like us, Wanda.” And: "Here you are, using [your powers] to make breakfast for dinner."

And I also really love that theme song. Every decade we did, before we moved on from shooting the episode in that decade, the producers would always set aside an hour or an hour and a half to do the little theme song scenes. And then to see it all put together was so fun.

My friends and I said to each other at the beginning of the pandemic: “When they say to close non-essential businesses, let’s apply that to our personal lives as well.”

It’s been an incredibly memorable year for you, between this role and how strange the world has been. What are you taking from this year — not as a mom, but just for yourself — as we move forward?

KH: My friends and I said to each other at the beginning of the pandemic: “When they say to close non-essential businesses, let’s apply that to our personal lives as well.” So, I’ve done a lot of closing of non-essential business. It’s been a lot of: OK, what do I really need? Friendship-wise. Stuff-wise. What’s really important? Everything’s been becoming much more simple. My getting-ready-in-the-morning regimen: simplified. My husband’s been gardening. Our garden’s gotten really nice! You remember, in Little House on the Prairie, when Pa would say “circle the wagons”? It feels like that.