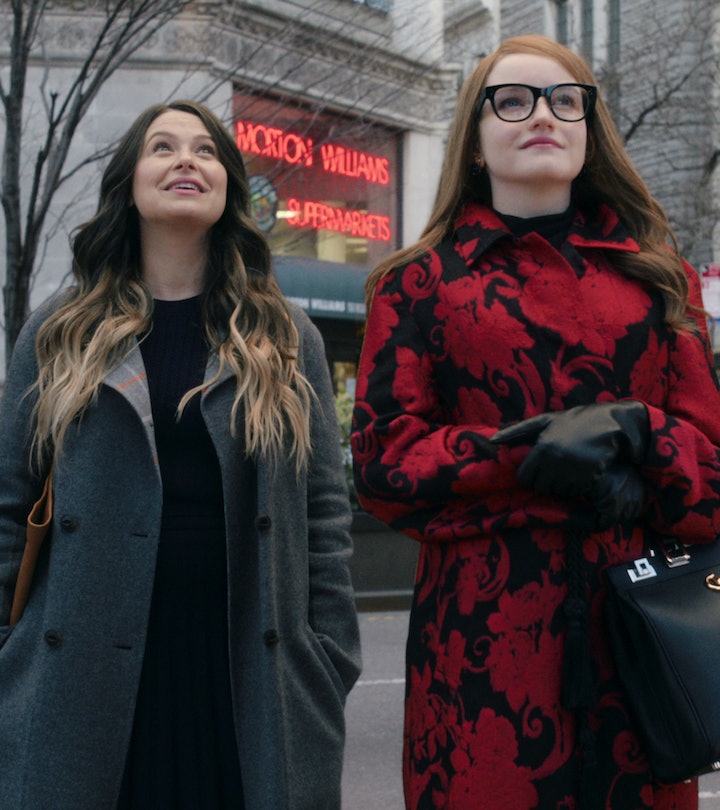 (And why you always say “Yes” when Shonda calls.)

When actor Katie Lowes — best known for playing Quinn Perkins on Scandal — discovered she was pregnant with her second child in March 2020, the first thing she did was tell her husband. The second thing she did was send a frantic message to her boss. “I emailed her,” Lowes tells Romper by phone, “‘Oh my gosh, I’m pregnant! When are we going back to work? What’s happening? I shot half of this show pre-baby. I don’t know what my body is going to do! I don’t know what’s happening!’” That show was Inventing Anna, the highly anticipated miniseries that was in the middle of filming at the time.

Her boss, Shonda Rhimes, answered within a minute.

“She said ‘First and foremost, congratulations,’” Lowes recalls. “‘And second of all, we will be OK. We will figure this out. You are safe. The most important thing is to take care of yourself.’”

And, of course, the Queen of Shondaland was right. Inventing Anna, the limited series based on the wild story of Anna Delvey (née Sorokin), finished on schedule (with Lowes), and then reached No. 1 on Netflix in its first week. But not everyone is a fan, least of all the real-life person behind Lowes’ character. Former Vanity Fair photo editor Rachel DeLoache Williams (and former friend to Delvey) has criticized the series vociferously on social media and in the press. Writing for Time, she described Inventing Anna as “shocking and dangerous” and “doing a conwoman’s PR.” Delvey herself responded on Instagram, claiming that not only had Williams attempted to convince her to collaborate on a book, but that the series accurately portrayed William’s “total Karen image.”

The back-and-forth, “she said, she said” nature of the women’s ongoing rivalry encapsulates Lowes own approach to playing Rachel, and her interpretation of the series as a whole. “There’s a lot of complicated feelings in this world in typical, beautiful Shonda fashion,” she says. “You can’t figure out if people are good or evil, or right or wrong. There’s a lot of sticky gray area. It’s very confusing and wonderful.”

Below, Romper talked to Lowes — who, at times during the interview, talked to her children, Albee, 4, and Vera, 14 months, because #MomLife — about playing the maybe/maybe-not villain of the series, pandemic parenting, and why the cops showed up at her wedding.

I want to start off by saying, I am so excited about this series. I was obsessed with the New York Magazine article.

Did you read it when it initially came out?

Yeah. I’m from New York, born, raised, and I was hearing mumblings a lot from friends that still live in New York like, “Have you heard this story? There’s this girl...” And then [Shonda Rhimes] called me about a year later and asked, “Do you want to play Rachel DeLoache Williams?” And when Shonda calls, you say yes.

Rachel is the friend that wound up getting scammed into paying for a luxury vacation to Morocco, right? Did you ever get to meet the real Rachel?

I did not meet the real Rachel. Some [actors in the show] did get to meet [their real-life counterparts], but Rachel is very... is one of the trickier characters I’ve ever had to play in my career, and I did not meet her. I did not read her book. I did go down her Instagram feed and Googled around a lot. Rachel may or may not be the villain of this story — there’s a lot of sticky gray area. Anna Delvey is sort of an antihero who you root for, and then it makes you root not for Rachel.

So other than Googling and trawling her Insta, how did you get into character?

We got to actually shoot in Morocco in the hotel where the con happened, this ridiculously over-the-top... one of the most insanely expensive places I’ve ever seen in my life. And once I was there, it just was really easy for me to tap into the emotional stakes of the situation. Wait till you see the Morocco episode! It’s so next-level.

How long were you there?

We shot for three, four weeks and we landed back in the States a few weeks before shutdown. It was the last international trip I took with my family, and I only had one child at a time. Now I have two.

So tell me about having a pandemic baby!

It was wild, it was hard, it was super scary. I found out I was pregnant days after lockdown. Thank God Shonda Rhimes is my boss.

This confirmation that she’s as cool as she always seems is a balm for my soul.

She’s the greatest boss in the entire world. They ended up going back to work during the pandemic and they pushed all of my scenes—

You would like some more milk? You got it honey. [Back to Romper] They pushed all of my scenes to be at the end of the entire shoot so that I could have the baby, have a maternity leave, get some resemblance of a figure back, kind of, and then come back to work. That’s what it is to work with Shonda Rhimes and that’s why you say yes when she calls. It’s not only about the material and the writing and the dialogue and the character being so good, but she actually cares and supports the people. Her being our boss during the pandemic was the most amazing thing.

[A toddler’s cry is heard]

OK, here’s milk! [Back to Romper] Sorry. My daughter sees that he got milk and now she’s screaming that she doesn’t have any. She wants whatever he has.

But has anything ever been this hard? I just… parenting in a pandemic has been so epically insane. It’s the hardest thing I’ve ever done.

Don’t even worry about it. I have two.

So you get that.

Oh yeah. Even now, as I pour juice for one…

… It better be the same amount.

This is my life. I swear to God I’m thinking about buying a little ruler to measure juice. It’s absurd.

[To her son] Do you want Santiago of the Seas again, baby?

My love, you have to choose quickly because I’m still on a work call…

OK! The robot one? Here you go! [To Romper] OK. I’m back. Sometimes I’m like, Am I the worst mother of all time?

Oh my God, definitely not! This is all of us right now!

But has anything ever been this hard? I just… parenting in a pandemic has been so epically insane. It’s the hardest thing I’ve ever done.

It really is, and that’s something you talked about in Season 4 of your parenting podcast Katie’s Crib.

Yeah. [Doing the podcast] kind of saved my life. Hollywood was down and theater was not to be and that doesn’t really leave room for much to do and we were going really stir crazy here. So the podcast was something I could do from my closet and talk to other people.

I find there’s so much empowerment in talking to other mothers.

Oh yeah. I mean, it’s just the only way to, I feel like, to get through this is to feel like you’re not alone, to stop following anyone on Instagram that’s making this look easy or perfect in any way, or makes you feel bad about yourself.

She was a great interview and talked about the pressures and FOMO that come from Instagram, but she said being pregnant during the pandemic was great because she didn’t feel like she was missing out on anything because everyone was home.

Yeah, and it was sort of like I felt like everyone was having these moments of like... “What did you do in the pandemic? Did you write the next great American novel?” I never felt that pressure because I was like... “Oh I cooked a person.”

It’s so much better than a sourdough starter, right?

That’s so fun! “Hey, this sucks, but pretzels are always amazing.”

Who doesn’t love a very salty carbohydrate when they’re depressed and pregnant? It was exactly what we needed — this super salty carbo bomb.

I love it, and I love that he’s bringing the East Coast to the West Coast.

You’re from Queens, right? Because you’ve got fantastic East Coast energy, and it supports my theory that East Coast people do really well in LA.

I know exactly where that is; we got married at a sleepaway camp in [the next town over].

Camp [name redacted]?! That must have been amazing!

Ah! Yes! Oh, it was the best, we rented the whole camp for 250 guests and made it Camp Shapirlowe all weekend. It was wild. The cops showed up at 5 o’clock in the morning because we were, like, in a drum circle that was, like, way too loud, we all were skinny-dipping in that little manmade lake. I mean, it was awesome.

So I feel like I could talk to you forever, but I want to be respectful of your time.

Oh my God. No! Please don’t make me go back to my children! [A child cries in the background; laughs] I’m kidding.

This interview has been lightly edited for clarity and length.