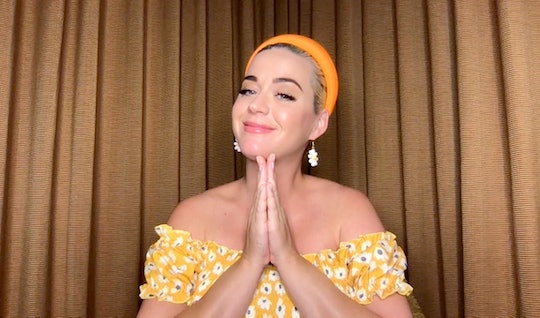 Katy Perry Reveals How Her Daughter Is Already Such A Virgo

"My daughter is a Virgo and she thrives in routine."

You simply must respect a mom who respects her child's astrological sign. Katy Perry's new baby daughter Daisy is a Virgo, for instance, and even though she's still just a wee babe in arms, her mom already totally gets her little Virgo vibes.

The American Idol judge and her fiancé Orlando Bloom welcomed their baby girl, Daisy Dove Bloom, to the world at the end of August, and the first-time mom has been embracing her new role ever since. As she told Ryan Seacrest and Kelly Ripa on Live With Kelly and Ryan on Monday alongside the rest of the American Idol judges, becoming Daisy's mom has required some scheduling. Especially since her daughter is already showing signs of being a tried and true Virgo.

When Seacrest asked Perry if her baby girl was on a routine schedule, she immediately replied, "Yeah, of course there's a routine. My daughter is a Virgo and she thrives in routine." Thriving on routine should come in handy since Perry was signing back into work when her daughter was just a few weeks old, "I did start filming American Idol Season 4 after I'd given birth, five weeks later. And I didn't plan that. But it was like, 'Oh, my God!' It was so intense, you know? Giving birth, then going back to work and breastfeeding, like — holy crap! 'This is what women do? Oh my God!'"

Thank goodness for a Virgo baby who loves a routine, right?

Katy Perry's daughter Daisy loves a routine as a Virgo.

Every Virgo out there is slow-clapping and nodding along at Perry's assessment of the needs of their astrological signs. Virgos are well known to be the big Zodiac signs who are fans of healthy structure and routine, so it's great that Perry already understands this about her baby girl. Although it makes sense that the "Fireworks" singer would look into her daughter's inherent Zodiac since she herself is a Scorpio, a sign known for being curious, persistent, loyal, and passionate about the people in their lives, as Cosmopolitan explains.

The new mom is certainly passionate about her baby girl. Perry told Good Morning America a little bit about the positive changes Daisy has brought into her life over the past four months, explaining how her arrival would change the way she showed up on American Idol, "I experienced a huge influx of love when my daughter came into our lives, and so I was definitely able to give more love this season."

Her daughter gave her an "influx of love" and Perry is giving her a little routine in return. Seems like a good deal to me.