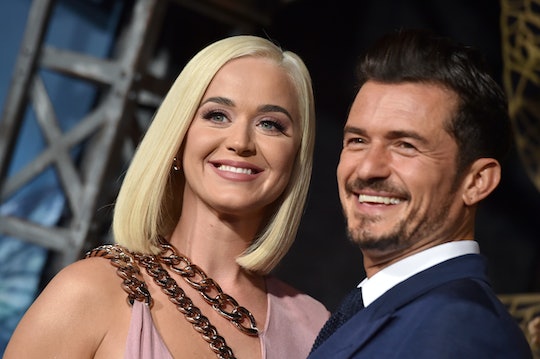 Cue the "Fireworks" because Katy Perry has given birth to her first child. The singer and her fiancé, actor Orlando Bloom announced the birth of their first child together, a baby girl, with a touching post on Instagram.

On Aug. 26, Perry announced that she had given birth to a daughter they named Daisy Dove Bloom through Unicef's Instagram account. "We are floating with love and wonder from the safe and healthy arrival of our daughter," the couple told Unicef in a statement and also shared a black and white photo of their newborn's hand holding onto theirs. "But we know we're the lucky ones and not everyone can have a birthing experience as peaceful as ours was."

"Communities around the world are still experiencing a shortage of healthcare workers and every eleven seconds a pregnant woman or newborn dies, mostly from preventable causes," their announcement continued. "Since COVID-19 many more newborn lives are at risk because of the increased lack of access to water, soap, vaccines and medicines that prevent diseases. As parents to a newborn, this breaks our hearts, as we empathize with struggling parents now more than ever."

Perry and Bloom, who are both UNICEF Goodwill Ambassadors, also said that they have set up "a donation page to celebrate DDB's arrival." "By supporting [UNICEF], you are supporting a safe start to life and reimagining a healthier world for every child," the new parents' announcement concluded. "We hope your [heart] can bloom with generosity."

Back in March, Perry announced she was expecting in an elaborate reveal, debuting her bump in the music video for her song "Never Worn White." During an Instagram Live, which she recorded after the music video's premiere, Perry announced that her baby was due sometime this summer — around the same time as her new album, Smile, which will be released on Aug. 28 and the wait for one is officially over.

Before welcoming her daughter, Perry said in an interview with Howard Stern in July that her pregnancy had been "really easy" on her body. "I'm not anxious at all," she said, ahead of her daughter's arrival. "I feel super blessed. I've had a really easy one, physically. I'm very active, I'm a mom on the move, as they say."

And it sounds like Perry's daughter had been active in the womb, too. During a mid-July interview with Hits Radio in the United Kingdom, she joked that she had given her daughter the nickname "Kicky Perry" because of the way her daughter would react when she played music for her. There's no doubt that Perry and Bloom's little one will love her music too now that she's finally made her debut.