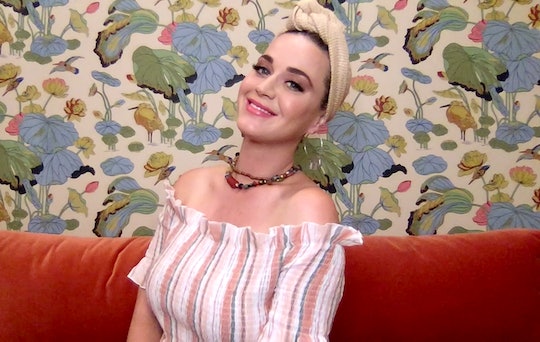 Her baby girl hasn't made her grand debut just yet, but Katy Perry, who's currently pregnant, revealed the nickname she's given her daughter. The "Fireworks" singer is still working out what she wants to call her when she's born, but for now she has a pretty funny (and apt) moniker to use for her bundle of joy.

Last week, Perry sat down for an interview with Hits Radio in the United Kingdom to give an update on her pregnancy. She is expecting her first baby with fiancé Orlando Bloom, who is already a dad to 9-year-old son Flynn. Perry admitted at the outset of the video interview that she is "waddling like a duck" as she nears the end of her pregnancy and that she has been eating loads of flavored ice since it's apparently pretty hot in California.

The 35-year-old singer also opened up about how her little girl has been reacting to listening to music and apparently she is a pretty active little one. "I call her 'Kicky Perry' sometimes," the mom-to-be told Hits Radio. "I love a pun."

It probably helps that little "Kicky Perry" has a mom who is a talented pop star. The "Smile" singer shared during the same interview with the radio station that she has been staying really active. "I've been dancing, I've been singing a lot," she said.

Now if you're worried that Perry is actually going to name her daughter Kicky, relax. First of all, it's kind of a cute name. But the expectant mom told Mix 104.1 Karson & Kennedy last month that no decisions have been made about the baby's name just yet. "We have yet to decide specifically on her name because, I think, we’ve got options and she’ll tell us," Perry told the radio station in June. "I’ll look at her and go, ‘oh yeah yeah, you are her, you are that.’”

It sounds like both she and Bloom are excited for Kicky Perry to come out and reveal herself to the world. The singer told Hits Radio in May that motherhood had always been something she wanted. "For me, obviously what’s in the cards is becoming a mother," she said. "I’ve always wanted to be that. I didn’t know if I could be that or if I’d have the capacity. My sister’s the most maternal one in my family and I’m like a logistics strategizer–you know–show-off, and I didn’t have the maternal gene." Maternal gene or not, little Kicky Perry is on her way.

More Like This
Hilary Duff's Daughter Mae Is Every Toddler Obsessed With 'CoComelon'
Gabrielle Union Admits She May Be Becoming A Bit Of A Dance Mom With 3-Year-Old Kaavia
Blake Lively Revealed She's Pregnant With Baby #4 In A Sparkly Dress & Sky-High Heels
Nick Cannon Announced The Birth Of His 9th Child, A Daughter Named Onyx