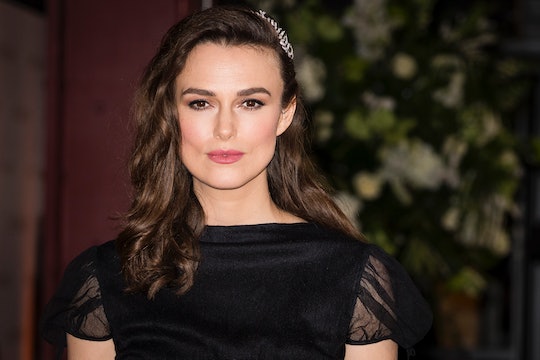 Watching The Great British Bake-Off with her 6-year-old daughter Edie one night, Keira Knightley got emotional. Amateur baker Lizzie Acker baked a cake that paid tribute to her battle with dyslexia, a condition Knightley has dealt with her whole life as well. She told People that the cake “literally had me bawling on the sofa," and do you think young Edie comforted her mother during her emotional time? Nope. Instead, she teased her mother for crying.

The Pride & Prejudice star, who is also mom to 2-year-old daughter Delilah with husband James Righton, explained to the magazine what it was about Lizzie’s cake that had her so emotional. “I am dyslexic,” she said. “Lizzie baked a dyslexic cake and said it was like the inside of her brain. It was such a beautiful cake, it made me cry. I totally sat there with my kid crying at Bake Off because this cake was so wonderful and I thought it was such a wonderful idea.”

Edie’s reaction was somewhat less emotional. “Anything like that, my kid is just like, 'Oh, my God. What is the matter with you?’”

While young Edie might not have a lot of patience for her mother’s emotional response to The Great British Bake-Off, it certainly makes sense to the rest of us. In late November, the Silent Night star announced that she, her husband, and both of her daughters tested positive for Covid-19. “I’ve got Covid and I’m feeling pretty rubbish,” she told The Daily Telegraph at the time, adding that her husband was asymptomatic and “being very smug about it. He is convinced it’s because he’s one of those cold-water swimmers and I’m not.” Both she and her husband were fully vaccinated, fortunately, and the whole family has since recovered.

Let’s also not forget that she gave birth just two short years ago, breastfed that baby and was also pumping while working. It’s a lot to take on, a very emotional time.

Not that Keira Knightley or anyone else needs an excuse to cry during a good bake on The Great British Bake-Off. I’m just saying Edie could cut her some slack, that’s all.