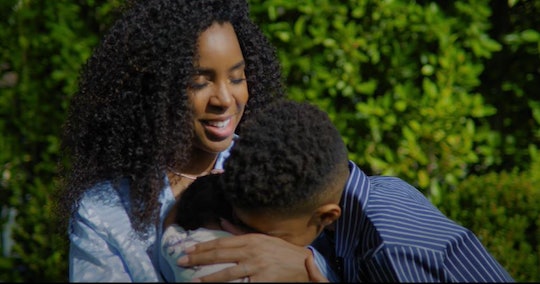 Catch one glimpse of those black, baby curls and you'll fall in love!

Motherhood is celestial, magical, universal, and full of pure love... elements that are beautifully displayed in Kelly Rowland's new music video as her newborn son makes the sweetest cameo with her and his big brother Titan. The 40-year-old singer's new baby boy, Noah Jon, made his first video appearance nestled against his mama's chest in the music video for her new song "Black Magic." Even sweeter, little Noah also gets nuzzled with kisses from his 6-year-old brother in the video.

While Rowland's "Black Magic" music video — released on Feb. 12 as part of her upcoming EP titled K — marks Noah's first video appearance, the little guy actually made his first official debut into the world last month. On Jan. 21, Rowland announced that she and husband Tim Weatherspoon had welcomed their second child together with a picture of Titan smiling down at his new baby brother. "We are truly grateful," she captioned the photo on Instagram.

It can be debated that Noah actually made two debuts in his mother's music video. In a few scenes from the video, Rowland shows off her bare baby bump, painted into a globe with the word "Love" spelled out over the continent of Africa. The entire video is obviously worth a watch, but make sure to take note around 3:44 in the video to see Rowland's baby boy make his appearance.

"'Black Magic' expresses everything there is to feel confident, feel proud of, feel encouraged by being Black," Rowland told Hype Magazine. The song is a reassurance call and a reminder to keep fighting the good fight "when it comes to equal rights, and justice," Rowland added. "To me, this is a fight song," she told the magazine. "We’re continuing to put our magic forth so that we can put it on display for others to continue to see, even when they don’t want to see it. But I think they can’t help but see it because Black magic is effortless."

It's nice to see new musical projects from the "Coffee" singer, but motherhood is truly her "happy place!"