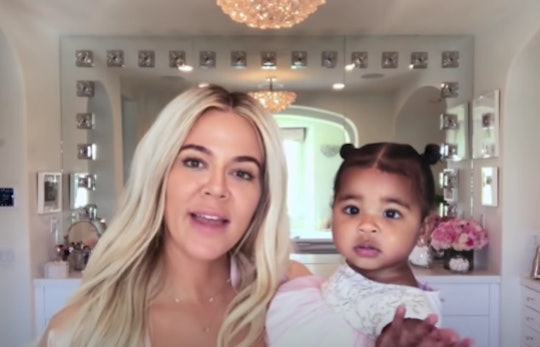 It has only been three years since Khloé Kardashian enjoyed her very first Halloween with her daughter True Thompson. Back then, it was her turn to decide on costumes and she went with an array of cute fluffy animals, eventually deciding on matching unicorn onesies that looked adorable on both mom and daughter. These days, the tides of decision-making have turned. Now 3-year-old True has decided on a Halloween costume look for the two of them and she’s agreed to be her daughter’s sidekick.

Khloé spoke to Ellen DeGeneres on The Ellen Show on Wednesday about her upcoming plans for Halloween with True, the daughter she shares with ex-boyfriend Tristan Thompson. The entire family is expected to go to her sister Kim Kardashian’s house, which should be a busy spot since there are now 10 Kardashian-Jenner grandchildren getting ready to trick-or-treat. And what will she and daughter True be dressing as this year?

“True is going to be Moana, and she wants me to be Pua the pig,” Khloé explained. “So, it’s a little shady of her, but that’s OK. I will be Pua for True.”

True Thompson has a “shady” costume idea for her mom.

It is a pretty shady costume idea for a few reasons. First off, Moana is obviously the star of Disney’s Moana, while Pua is a much less important character. And I guess also because Pua is a pig.

The Good American designer has had plenty of chances to wear more glamorous Halloween costume choices in the past, so I wouldn’t feel too bad for her. In 2020, she dressed as Cleopatra while True wore a coordinating gold costume and called “Royal Highness True” and Thompson was a gladiator. And in 2019, Khloé looked incredible in a sleek Cruela De’Vil costume while True was a nameless Dalmatian puppy from the Disney movie 101 Dalmatians. In both cases, Khloé was the main event costume while True was her sidekick. Which means it’s her turn to get a little taste of her own medicine, I guess.

Not that the proud mom minds, obviously. Khloé and True tend to do pretty much everything together, whether they’re going for hikes or baking or making potions in the kitchen. What’s one little shady Halloween costume between pals?

More Like This
Khloé Kardashian Promises Tristan Thompson's Late Mom Her Boys Will Be "OK"
Kim Kardashian Now Owns A Piece Of Jewelry From Princess Diana's Collection
Eagles Coach Nick Sirianni Brought His Kids To A Press Conference & It Was Hilarious
Freeze! The Single From The New 'Bluey' Album Just Dropped
What Parents Are Talking About — Delivered Straight To Your Inbox