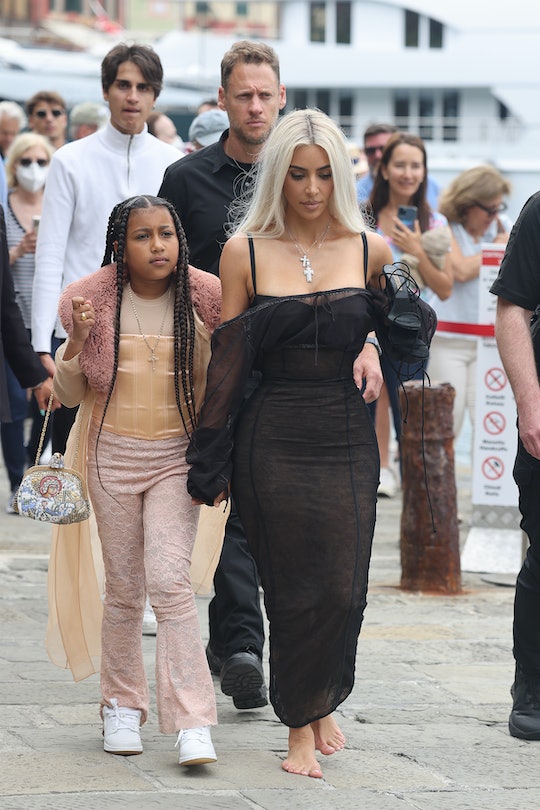 The matching leg pop is spot on!

As 8-year-old North West grows up, she’s developing her own distinct style influenced by her mom, Kim Kardashian, and her dad, Kanye West. But in new pictures from Portofino, Italy, North looks just like her mom as she nails Kardashian’s iconic pose. From the pout to the leg pop, it’s everything!

The Skims founder, her oldest daughter, and most of the Kardashian family was in Italy for Kourtney Kardashian and Travis Barker’s wedding on May 22. Kardashian has posted several photos to Instagram from the wedding festivities since then — mostly of the stunning fashions on full display — but North absolutely steals the spotlight in the photos Kardashian posted Tuesday.

“Lunch in Portofino with my little Northolino,” Kardashian captioned the post. The first photo is a gorgeous shot of North and The Kardashians star on a boat, with tree-covered hills beyond blue water behind them. Kardashian is wearing a form-fitting sheer black dress, and North is glowing in top to bottom pink. She’s wearing a baby pink corset shirt, with a pink fur jacket over the top and matching pink lace pants. White sandals and a colorful clutch complete the look.

The most striking thing about the photo is the way North nails her mom’s pose, as she gazes intently on the camera with one knee bent and an arm wrapped around her mom’s waist. They look like twins!

The next photo in the carousel is a close-up shot of Kardashian and North, as they give their most serious expression. Kardashian also include paparazzi shots of her and North, as well as posed shots in a glittering gold room and scenes of the beach in Portofino.

Kardashian posted other photos of her and North to Instagram earlier this week, wearing more casual outfits and dancing at a restaurant. North is laughing and clearly having a blast with her mom.

In addition to North, Kardashian also shares daughter Chicago, 4, and sons Saint, 6, and Psalm, 3, with West. She filed for divorce from the rapper in February 2021, and the two have had some struggles with co-parenting since then. However, in a recent episode of The Kardashians, she opened up about the importance of West remaining a dedicated father, per People. "No matter what we're going through, I always want my kids to be around their dad as much as possible and just have their mornings with Dad and get dropped off at school,” Kardashian said.

It’s wild how fast North is growing up. Her personality and fashion are all her own, but it’s nice to see her still trying to be like her mom for a little while longer before she hits those unpredictable pre-teen years. Soak it up, mama!

More Like This
Sarah Levy Reveals Birth Of Her Baby Boy & His Name Is A Sweet Tribute To Her Dad
Barack & Michelle Obama Shared The Most Adorable Baby Photos Of Malia On Her Birthday
Megan Fox Explains Why She Asked Machine Gun Kelly If He Was Breastfed As A Baby
Catherine Reitman Calls It Like She Sees It: “Being A Working Mother Is Impossible”