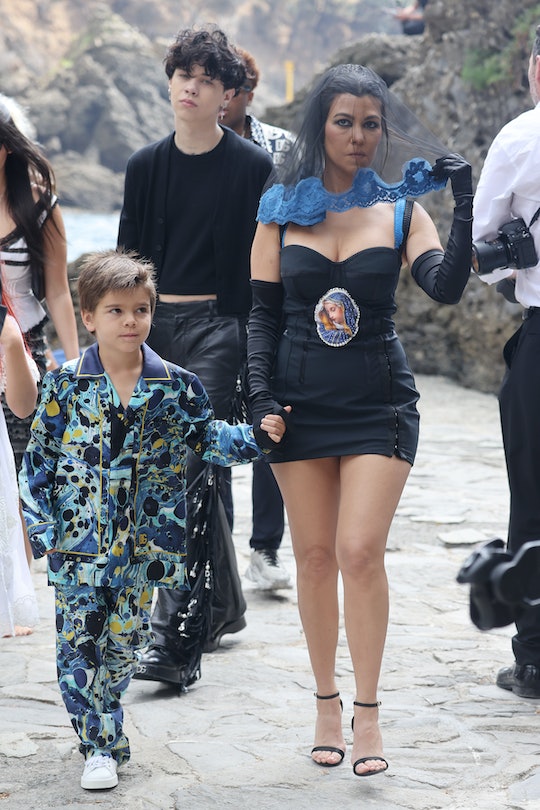 Kourtney Kardashian & Travis Barker’s Kids Had Roles In Their Wedding

Reign was a little ring bearer.

Kourtney Kardashian and Travis Barker officially tied the knot in Portofino, Italy over the weekend for what could technically be called their third wedding. And finally, after two ceremonies and a proposal that did not include her three children, Kourtney’s kids were not simply at their official ceremony but also had big roles in the wedding alongside Travis’ three children. It was clearly a special day for everyone involved.

The loved up couple were first “married” by an Elvis Presley impersonator in Las Vegas earlier this year, but explained afterwards that this ceremony was not, in fact, legal. It was a spur of the moment sort of thing for just the two of them. Then they were married in a civil ceremony last week in Santa Monica, California, joined by Travis’ father Randy Barker and Kourtney’s grandmother Mary Jo Campbell but no other family members. Not even Kourtney’s three children, 12-year-old son Mason, 9-year-old daughter Penelope, and 7-year-old son Reign, who she shares with ex-partner Scott Disick, were in attendance. Nor were Travis’ kids, 23-year-old stepdaughter Atiana De La Hoya, 18-year-old son Landon, and 16-year-old daughter Alabama, who he shares with ex-wife Shanna Moakler.

When it came time for Kourtney and Travis to get married in Italy, however, they made sure all of the kids were there. Alabama and Atiana were bridesmaids at the ceremony held over the weekend in Portofino, while Reign acted as ringbearer and Penelope was a flower girl.

Kourtney’s wedding ensemble also honored her family, as E! reports that she had the words “family loyalty respect” cross-stitched into the Dolce & Gabbana headpiece, just as Travis has a head tattoo with the same message. The couple included the entire KarJenner clan in a multi-day European holiday with their big (and presumably final) wedding ceremony, and it was a lovely way to kick off their new lives as a blended family of eight. And it’s exactly how Kourtney has said she would like it to be. “I love the idea of a blended family,” the mom of three said in a recent episode of The Kardashians. “I think the more kids the merrier and it's like more people to love. I am really close to Travis' kids and I love them and it's a beautiful thing.”

Kourtney and Travis are hoping to add to their beautiful family in the near future with a baby, so it really is the more the merrier.

More Like This
Catherine Reitman Calls It Like She Sees It: “Being A Working Mother Is Impossible”
Sarah Michelle Gellar Is Facing A Terrifying Parenting Milestone: Sleep Away Camp
Lauren Conrad Shares Experience With "Lifesaving Reproductive Care" After Ectopic Pregnancy
Tom Hiddleston & Zawe Ashton Are Expecting Their First Child Together