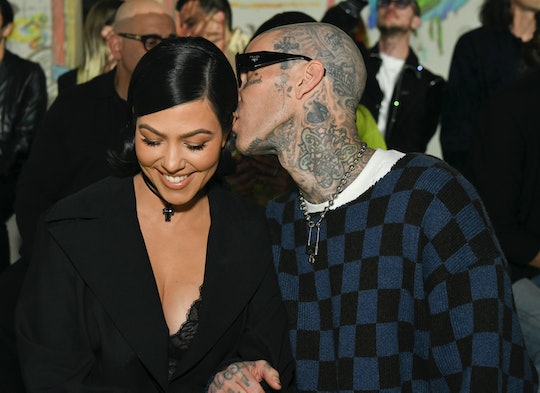 “Travis and I want to have a baby.”

The Kardashian brood may be growing by one more very soon. In a new trailer for The Kardashians on Hulu, Kourtney Kardashian and her fiancé Travis Barker revealed that they would like to have a baby together and it seems the planning process has already begun.

“Travis and I want to have a baby,” Kourtney says in a trailer for The Kardashians, which drops on Hulu on April 14. In the trailer, the two are visiting a doctor to discuss possible fertility treatments, with the doctor telling Travis, “Put the sample in this cup,” and Kourtney replying, “We’ll take our mics off so you don’t get the audio.” Later on in the trailer, Kourtney is seen on a hospital bed with Travis at her side kissing her hand.

In a follow-up clip from The Kardashians obtained by Us Weekly, Kourtney opened up about how much of a struggle IVF treatments have been for her, admitting to her mom Kris Jenner, “It hasn’t been the most amazing experience,” before adding, “Every single person on social media is always like ‘Kourtney’s pregnant, Kourtney’s pregnant, Kourtney’s gained so much weight. It’s so rude to comment on people when you have no idea what they’re actually going through. The medication they’re giving me, they put me into menopause. … Literally into menopause.”

The couple, who got engaged in a spectacular fashion last October, have hinted that a baby might be in their future before. Perhaps most notably when the Blink 182 drummer and his new fiancée dressed as the couple from True Romance last Halloween and wrote on Instagram, “our son’s name would be Elvis.” And of course, Kourtney froze her eggs back in 2018 “for safety,” so that works out well.

While the couple are keeping details about a possible pregnancy quiet for now, they’ve both been very open about how much they love being parents. Kourtney’s close relationship with her three little ones is well-documented, while Travis said in an interview last September, “I love being a dad. I always say that’s my best ... it’s better than any song I’ve ever made or any accomplishment I’ve ever had or I’ve done. I feel like being a dad, just nothing compares.”

It would be lovely to see these two have a baby named Elvis or otherwise.