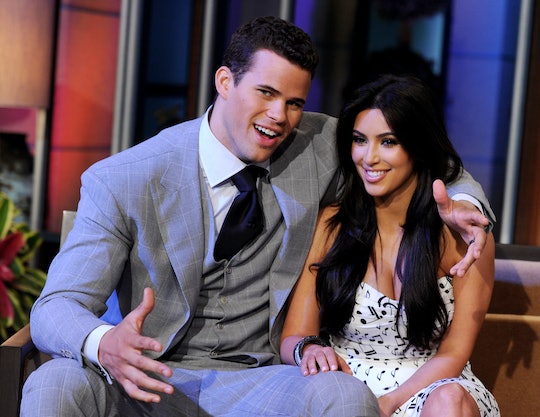 Kim Kardashian Worries About Explaining Kris Humphries To Her Kids

North is on TikTok and has seen those KUWTK clips.

As Kim Kardashian’s children get older, they’re scrolling through social media just like every other kid these days. Like her daughter North, who watches TikToks and is apparently getting a glimpse at her mom’s past. Her past with her ex-husband Kris Humphries, to be specific, which is a conversation she doesn’t really want to have with her kids just yet.

In a clip from the May 20 episode of Keeping Up With The Kardashians, Scott Disick asked the mom of four if her kids have seen the E! reality show. While Kardashian said she didn’t think her oldest, North West, has seen full episodes, she knows she’s seen clips on TikTok. Specifically that now-iconic earring clip from a 2011 episode while the family was vacationing in Bora Bora. As you likely recall, Kardashian was married to Humphries at the time. In the episode, he throws her into the ocean in and Kardashian had a full meltdown when she realized she lost her $75,000 diamond earring.

“I think clips on TikTok,” Kardashian told Disick. “She sees it's a popular TikTok where they do the crying scene from Bora Bora. Pretty much all my crying scenes. So she sees that stuff and she'll come in and go ‘Mom, I lost my earrings.’ She'll do that as a joke and I'm just like, ‘You have no idea what that is.’”

Disick responded that her kids will probably watch Keeping Up With The Kardashians at “some point” and he also thinks about how to address it all with his three kids, whom he shares with Kourtney Kardashian.

“I don’t really want to explain like who Kris Humphries is,” Kardashian told Disick, who replied, “But that is your life, it is your past and at some point they’re gonna be interested in seeing everything.”

Kardashian said she understands they’ll be interested and she wants to tell her kids about her past, but not right now. “But, I'm just not ready for the kids to see it yet,” she said.

“I'm just not ready for the kids to see it yet, at least North,” Kardashian added in the on-camera confessional. “Recently the kids have asked to see the show but I'm really hesitant just because me personally, I'm going to have to explain a lot.”

Kardashian and Humphries were married in August 2011. They filed for divorce 72 days later. Three years later, she tied the knot with Kanye West in 2014, and welcomed four children together: 7-year-old North, 5-year-old Saint, 3-year-old Chicago, and 2-year-old Psalm. West and Kardashian filed for divorce after seven years of marriage in February 2021.

Keeping Up With The Kardashians is currently airing its final season. The reality show, which first premiered in 2006, will end after 20 seasons, so maybe not today, but one day Kardashian will have to catch her kids up on a lot.