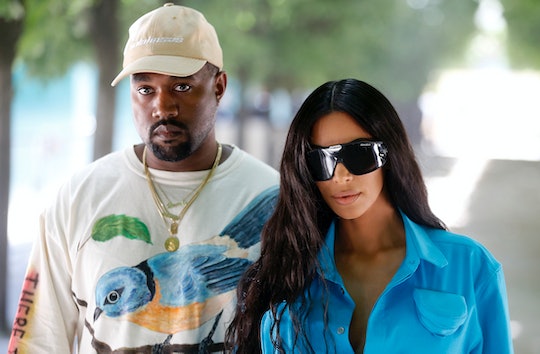 Kim Kardashian Has Filed For Divorce From Kanye West

While they're going separate ways, they are "committed to co-parenting together."

After six years of marriage and welcoming four children together, Kim Kardashian and Kanye West are reportedly filing divorce. While neither have confirmed the development, TMZ has reportedly obtained court documents filed by Kardashian's lawyer.

Rumors that Kardashian and West — who have been together since 2012, eventually marrying in 2014 — were calling it quits first started circulating at the beginning of January. Over the past month or so, neither had commented on the speculation.

Over the course of their time as a couple, the two have been plagued with near constant rumors and high drama. There was the Taylor Swift feud drama, then the time Kardashian was held captive and robbed in Paris in 2016. And of course, all of those Twitter rants from West over the years. But through it all, the high-profile couple really stuck together, welcoming four children together: 7-year-old daughter North, 5-year-old son Saint, 2-year-old daughter Chicago, and 1-year-old son Psalm.

Over the years, though it may have been difficult at times, Kardashian stood by her man. At least, until now. On Feb. 19, TMZ reported that Kardashian had filed papers to legally divorce West.

Kim Is Reportedly Calling It Quits

TMZ has reported that Kardashian filed divorce documents through her lawyer, prominent divorce attorney Laura Wasser, asking for "joint legal and physical custody" of their four children, an arrangement West has apparently agreed to because he and Kardashian are "committed to co-parenting together."

Before documents were filed, sources had spoken with several news outlet, saying that "divorce is imminent," as one told Page Six earlier this year. Though Kardashian hadn't filed at the time, another source told People that both she and West were prepared for it. "He knows that she’s done," the source told People. "She has had enough, and she told him that she wants some space to figure out her future."

Kardashian reportedly held off on filing for divorce because she wanted "to make sure she's making the right decision for the kids," according to an insider who spoke to E! News. Romper's requests for comment from the couple's reps haven't been returned.

One of the first signs that Kardashian and West were headed separate ways came when they apparently did not spend the holidays together this year. West reportedly spent the holidays at his ranch in Wyoming, while Kardashian and their children celebrated at her sister Kourtney Kardashian's home in Los Angeles. It was also noted by Cosmopolitan that Kardashian had been spotted in public not wearing her wedding ring, perhaps a harbinger of things to come.

When Kardashian first married West in 2014, she was building her career as a businesswoman and influencer while he was working on his music and fashion line. In recent years, things have changed. Kardashian has decided to go back to school to become a lawyer like her late father Robert Kardashian with a focus on prison reform, and West appears to have retreated much of his time to the couple's Wyoming home. As one source told People in December, "their lives don't overlap much" anymore.

This past summer, there was also an issue with West sharing intensely personal details about the couple's life, and particularly his hesitance to become a father when they were expecting daughter North, at a campaign rally for his failed presidency bid. The experience reportedly left Kardashian "furious" and caused a deeper rift in their marriage, according to Elle.

Kim Kardashian and Kanye West are in marriage counseling.

Earlier this year, TODAY reported that the couple was going through marriage counseling as they lived in their separate homes, working on their issues before filing for divorce. As a source told the news outlet, "They are working through it ... (and) trying to work through things."

While it sounds like couple is moving towards a separate future, CNN reported in January that they remain "amicable" and that they are "fully aligned when it comes to the kids." Keeping the kids happy is, after all, top priority.

This article was originally published on Jan. 6, 2021