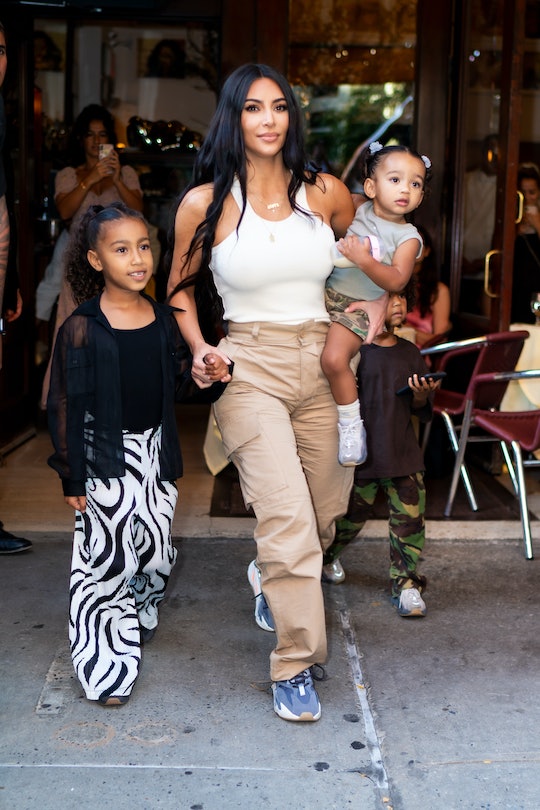 Kim Kardashian’s Kids Dressed Up As Music Icons For Halloween

They pull off classic looks from Aayliah, Sade, Snoop, and Eazy E.

There is no such thing as one Halloween look for Kim Kardashian, or her four kids. Halloween is more of a season, with several costume changes through the days leading up to Oct. 31. And the Skims founder just shared their first costume choice for the spooky season on TikTok. It has to be said, right out of the gate the four kids totally nailed it with spot-on looks as music icons, complete with that bored celebrity expression. It’s almost like they picked it up from someone...

First up was North, who dressed in a recreation of singer Aayliah’s 1997 look for the Tommy Hilfiger campaign, complete with puffer coat, wide jeans with one red leg and one blue leg, and a bandeau top. Then came little Saint dressed as Snoop Dogg, in braids and a grey plaid shirt. Then came Chicago as Sade, in full denim shirt, jeans, and boots along with a long braid and big gold hoops, just like the “No Ordinary Love” singer’s look from 1980. Finally 3-year-old Psalm dressed as rapper Eazy-E in a “Compton” baseball cap and an all black outfit.

Kardashian’s kids, all of whom she shares with her ex-husband Kanye West, will most certainly be trying out different costumes before Halloween officially arrives. In the past, the mom of four has tried out family costumes, like in 2019 when the entire family (including ex-husband West at the time) dressed as the Flintstones. West was Dino the dinosaur while Kardashian was Betty, North was Wilma, Saint was Fred, Chicago was Pebbles, and baby Saint was Bam-Bam. She went on to dress them as tigers from Tiger King in 2020 (back when we were somehow all watching Tiger King on Netflix), and Saint once even dressed up as his own father for Halloween in 2018.

Dressing as these music icons for a photo shoot sort of feels like a dry run for the Kardashian kids. They’re just dipping their toes into those Halloween waters, seeing what feels right. What they will eventually dress as for the actual day of trick-or-treating remains to be seen.

More Like This
How Old Should Kids Be Before They Watch The 'Christmas Story' Sequel?
David Beckham Impressed Mariah Carey With His Rendition Of "All I Want For Christmas"
20 Of The Best Christmas Movies For Kids
Rubble From 'PAW Patrol' Is Getting His Own Spinoff Series Full Of "Messy Demolition"