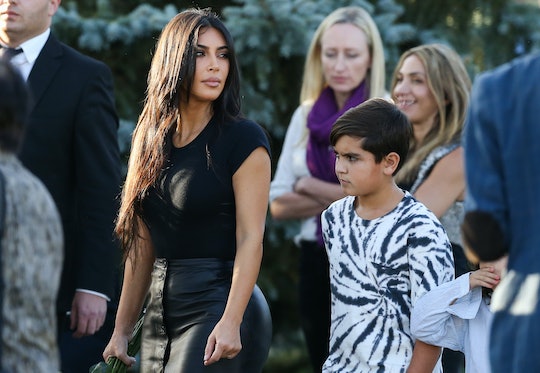 “Hi, I don't wanna disrespect North but I don't think she should do the lives unless someone is with her.”

Earlier this week, Kim Kardashian’s 8-year-old daughter North West went live on her shared TikTok account with her mom and gave millions of fans a peek at her home. She ran through her house, filming her pet lizards, Christmas decor and more. When she got to her mom’s bedroom, she told her mom she was live and Kardashian shut it down. As funny as it was to see North running around and being silly, her older cousin Mason Disick was quite concerned. Perhaps especially because he did something similar himself. In fact, Mason texted Kim Kardashian about regretting going live on Instagram last March, and boy has this kid grown into a mature young man.

Last March, 12-year-old Mason, who is the oldest son of Kourtney Kardashian and her ex-partner Scott Disick, set up his own Instagram account without checking with his parents. He went on to share some private family information during a live question and answer session on the platform, which his mom promptly disabled as soon as she found out. It seems he was using the school computer and his iPad without letting her know. Now, a year and a half later, Mason admitted to his aunt that he regrets his decision to go live.

In a text exchange Kardashian shared on her Instagram Story to celebrate Mason’s birthday, he wrote, “Hi, I don't wanna disrespect North," the first text reads. “But I don't think she should do the lives unless someone is with her, because people are always screen recording and she might tell information that isn't correct and stuff like that, that she will regret.”

Mason went on to write, “I did the same exact thing as she did. I would do the lives and now I regret saying one of the things that I said. Just in case for safety.”

Kardashian responded, “I appreciate you looking out Mason and I agree. She felt bad, and I don't think she will do it again, but it could be good if you talk to her about it.” The sweet boy, who Kardashian called “a helpful king,” said he would “love to talk” to North about it the next time he was over.

Mason Disick is modeling mature behavior most adults might struggle to emulate. He can express regret for past decisions, concern for his cousin, and love for his family in general. A helpful king indeed.