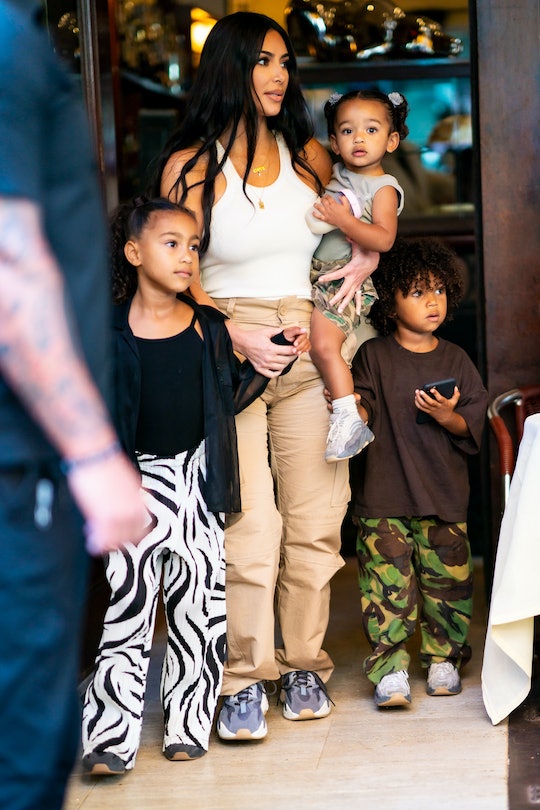 Kim Kardashian's Focus Is On Her Kids Amid Divorce Rumors

She wants North, Saint, Chicago, and Psalm with her.

Divorce is not easy on anyone, least of all kids, and I think it's safe to say that the aim of most parents is to make it as easy on their children as possible. In the middle of all the divorce rumors swirling around, Kim Kardashian's focus is reportedly on her kids and their future home. She and her husband of six years, rapper Kanye West, might be coming to the end of their marriage, but her kids need to have some security in their lives moving forward. And it seems Kardashian wants to be the one to offer them that secure home base.

On Wednesday several news outlets shared reports that the KKW mogul and West were heading for divorce after six years of marriage. These reports noted that West has been staying at the couple's ranch in Wyoming while Kardashian has been living in Los Angeles, California with their four children, 7-year-old daughter North, 4-year-old son Saint, 2-year-old daughter Chicago, and 1-year-old son Psalm.

Romper has reached out to reps for both Kardashian and West and is waiting on a reply.

While neither West nor Kardashian have spoken publicly about the divorce rumors, one source told The Sun that Kardashian is moving forward with plans to seek full custody of their children. "Neither of them want to seem like the loser in this divorce and they both will fight hard for their kids. Kim has made it clear she wants full custody so if Kanye tries to fight her on that, the custody battle will be brutal."

The Kardashian-West brood has reportedly been occupying much of their mom's thoughts and concerns during this time of upheaval, sources told People, noting that she has not yet filed for divorce out of worry for her kids. "She is sad about it, of course. She just feels she has done everything in her power to make her marriage work. Even though she has been thinking about divorce for months, she hasn't filed because she feels terrible for the kids."

Kardashian has reportedly already hired well known divorce lawyer Laura Wesser (the very same lawyer who inspired Laura Dern's character in Marriage Story), and that same source told People she plans to stay in her home in California with the kids for the foreseeable future. "She provides a safe and stable environment for the kids. She is a great mom and the kids will be fine."

It undoubtedly helps the Kardashian's entire family lives close by, along with her kids' cousins to provide some much-needed respite from the drama of divorce.