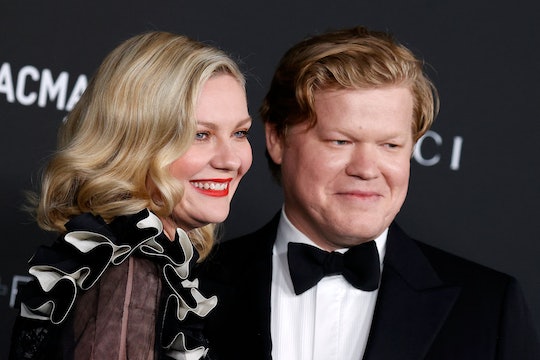 Sometimes it takes years before you land on your baby’s perfect nickname, but it seems like Kirsten Dunst and Jesse Plemons found their youngest son’s fairly quickly. At 7 months old, the couple has given their little guy a really cute nickname. So cute that the 39-year-old actress has proudly referred to him with it a number of times already.

Dunst recently sat down for an interview with Jimmy Kimmel on Jimmy Kimmel Live! and shared an extremely rare behind-the-scenes look at her life as mom to 7-month-old son James Howard and 3-year-old son Ennis Howard. And little James is apparently known by his family as “Big Kahuna,” apparently.

Now, every baby is different, of course, and no one wants to body shame an infant, but the average weight of a 7-month-old baby is between 16 and 18 pounds, according Medical News Today. I’m just saying the nickname “Big Kahuna” seems pretty apt for Kirsten Dunst’s baby boy. Also it sounds pretty cool, so James should wear that name proudly.

Kirsten Dunst has a cute nickname for her son.

This isn’t the first time Dunst shared her baby boy’s nickname. “This is the newest guy, the Big Kahuna,” Dunst told The New York Times when she first introduced her sweet baby in September. “He's an angel, but he's a hungry angel. And a heavy angel.”

Now that James “Big Kahuna” Howard is a bit older, he’s also getting pretty mobile, “All he wants to do is bounce, walk, be like his brother and walk around,” Dunst told Kimmel. “He just wants to walk and run, he doesn't even know what crawling is.”

All that moving around has apparently thrown her baby boy off his sleep schedule too, “I've been sleep training a 7-month-old so I had a crying baby all night last night so I'm hanging on by a thread. He was so good and then last night it was like the sh*t hit the fan. I was sleeping a half hour in between shoving a pacifier in his mouth.”

Maybe the “Big Kahuna” was crying as a way to rebel against his nickname. Maybe he was hoping for something more in the “Jimmy” or “Jamie” department. Personally I hope he warms to “Big Kahuna.” It’s very cool.