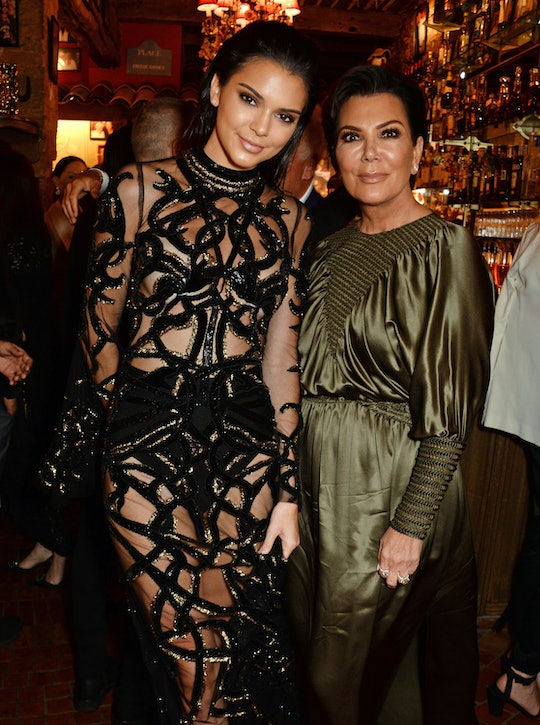 Kris Jenner has inadvertently gotten into some hot water. The momager of six sat down with Ellen DeGeneres on Thursday for a chat about her eleventh grandchild, Kylie Jenner’s newborn son Wolf Webster with boyfriend Travis Scott. Innocent enough, it would seem, especially when she was clearly ready to just gush about how much Wolf looks like his 4-year-old sister Stormi. But things took a turn in the Twittersphere when she was asked about future grandchildren.

It all started when DeGeneres asked Jenner point blank which one of her six kids she thought might be the one to give her grandchild #12. After clearly trying to come up with the most palatable answer, because that question clearly leads to many an uncomfortable reaction from her kids, Jenner said while looking askance at the audience, “Well, I think it would be nice if it was Kendall, right? She's the only one who hasn't had a baby."

When DeGeneres asked if Kendall wants a baby, Jenner said, “I think she would eventually love to have a baby. Yeah.”

Kendall shared her own feelings about having children in a 2018 interview with DeGeneres. “I have moments when I'm like, 'Do I have baby fever? Do I want a baby right now?' But I don't, I don't,” she said. “I'm good. I can wait for a little while longer.”

With this in mind, some Keeping Up With The Kardashians fans weren’t too thrilled with Jenner’s comment about her daughter. “Kris Jenner revealed that it will be nice if Kendall had a baby? Why mess up Her life! Oh I would make a Great Storyline! Ok I get it!” one fan tweeted.

Another Twitter user wrote, “This is an awful thing to think of your daughter in my opinion.”

This Twitter user accused Jenner of saying Kendall was not “whole” without a child, writing, “If my mother said this about me, implying I'm not whole without a child in my life, I would be livid and tell her to mind her own goddamn business. Kris Jenner is a scourge on feminism, no surprise there.”

Another social media user wrote, “Even though Kris might want Kendall to have a baby, it doesn’t seem like Kendall plans to have a kid any time soon…” while another added, “No!!! Let Kendall enjoy her super model status and freedom! Why stick her with a kid! She is enjoying herself and I am sure she does not want to be stuck at home with a kid when she can be jet setting all over the world being a fabulous model so she needs to enjoy continue that!”

It does feel important to note that Jenner did not say she expected Kendall to have a baby any time soon or imply that her incredibly successful supermodel daughter was somehow less than whole without a baby. It’s possible that she just wasn’t sure what to say when asked about another grandchild. Or maybe she does want Kendall to have a baby. Either way... she might want to avoid discussing in public moving forward.