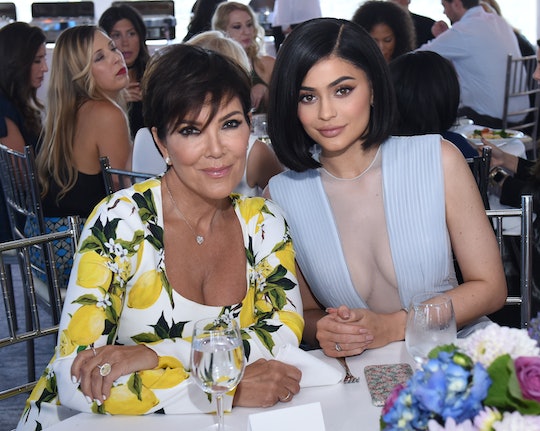 We Don't Have A Photo Of Wolf Yet, But Kris Jenner Just Revealed Who He Looks Like

“Lovey” was in the room when he was born.

Kylie Jenner and Travis Scott have yet to share a photo of their baby boy Wolf, born just weeks ago, but it’s okay. We can wait. Because Kris Jenner just told us during an appearance on Ellen DeGeneres’ talkshow that her grandson looks just like his older sister Stormi, so of course he’s a cutie.

The grandmother of 11 sat down for a chat with DeGeneres on Thursday and naturally the subject of her newest grandchild, Wolf Webster, came up, and the first thing she had to say was such a grandma quote. “He’s so cute!” The proud grandmother, whose grandchildren call her “Lovey,” explained that she joined her youngest daughter Kylie and rapper Travis Scott “in the hospital when he was born.”

“It was me and Kylie and Travis because they have rules and regulations now,” she said, “so you can only have so many people” alluding to restrictions on hospital guests due to Covid-19.

While the party in the delivery room was a little smaller than the momager was used to, none of that mattered when her grandson was born. “When he came out, it was like ‘there’s Stormi being born all over again.’”

Not only does baby Wolf look like 4-year-old sister Stormi, their birthdays are just one day apart. Stormi Webster was born on Feb. 1, 2018 while her baby brother Wolf was born on Feb. 2, 2022. Which is apparently Kylie’s angel number, according to her mom.

Wolf’s birth has apparently turned Stormi into a loving big sister, a Kardashian insider told People, and that she is all about “helping out with her baby brother.” The source also noted that Stormi is “fascinated by her little brother and has been able to hold him," perhaps because, if Kris Jenner is to be believed, Wolf looks just like her. It must be like holding a baby mirror up to her own face.

While Kris Jenner is certainly excited about Wolf, she also loves her granddaughter Stormi. “Thank you Stormi for your smile and your laughter that fills every room you walk into,” Kris wrote in a birthday post for Stormi. “You are the most amazing daughter, granddaughter, cousin and friend and we are all so blessed to have you in our lives. You are so smart, so kind, so funny, and so full of passion for everything always.”

With any luck, Wolf will pick up on some of his sister’s quality personality traits as well as looking just like her.