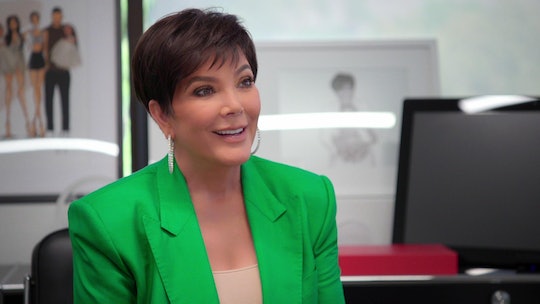 Kris Jenner has a lot of people to keep up with in her life as the world’s most famous momager. Especially her incredibly busy daughters. So what does a momager like her do when she’s organizing the contacts in her phone? She gives her daughters some truly puzzling names that don’t really make a lot of sense to anyone but her, presumably. I mean, she is Kris Jenner. There has to be some sort of method to her madness.

In the most recent episode of The Kardashians on Hulu, Kris had to call four of her five daughters to let them know about Travis Barker’s impending proposal to her oldest daughter Kourtney. Which meant the world got to see how she has saved daughters Kylie and Kendall Jenner in her phone, as well as daughters Kim and Khloé Kardashian.

TikTok user @gaymanwithaspraytan called attention to their names in a viral video on Thursday, asking the very valid question, “was anyone else gagged when they saw all the Kardashians’ numbers saved in Kris Jenner’s phone? Like, ‘Kylie New New 2022?’”

This might not seem too unusual except this portion of the season was presumably filmed in October 2021. So how precisely would mom of two Kylie Jenner have already used two new phone numbers in 2022 when 2022 hadn’t happened?

From there we see Kris call daughter Kim, or as she is referred to in her mom’s contacts, “Kimbo 2022.” The Kimbo is great, obviously, but she also has a 2022 number in 2021? Now, it should be noted that many fans have speculated that the scenes featuring Kris’ phone in Episode 3 of The Kardashians were perhaps reshoots. Either way, storing yearly phone numbers is still quite chaotic.

Then there’s Khloé, who has kept the same phone number since 2020, apparently, because her mom has saved her as “Khloe 2020.” Although she seems to have exempted herself from using the accent over the “e” even though the rest of us have to and even though, he pointed out, “you named her.”

Finally, Kendall is in Kris’ phone as “Kendall Nuevo.” You know, Spanish because of her tequila brand.

The Kardashian/Jenner clan are all big fans of unusual nicknames, so none of these should come as a great big surprise. Kris herself refuses to be called “grandma” by her 12 grandchildren and instead is called “Lovey,” which she should also trademark. Khloé is KoKo, Kim is often called Kiki, and Kendall is Kenny.

So I suppose the real mystery that needs to be solved her is how Kim and Kylie are pulling off their time travel. And why no one can keep a phone for very long.