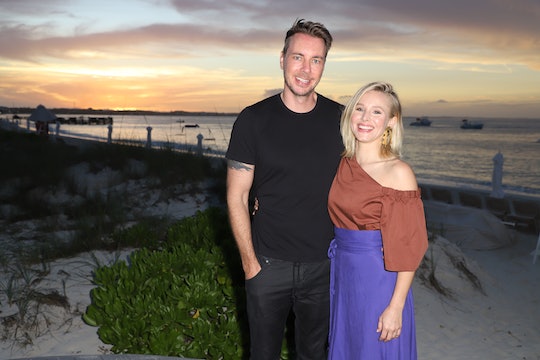 “I know you’re tired, but it’s been two weeks, so we really got to get to it.”

Just like the rest of us, Kristen Bell and Dax Shepard also apparently have to set aside a time on the calendar for a little intimacy. In a recent interview with Self, the mom of two opened up about her relationship with her husband of nearly eight years and how they keep that spark alive.

While The Good Place actress told the magazine she finds all the “stupid sh*t [Shepard] does just by being him” attractive, their sex lives sometimes need a little boost in the scheduling department. “There are some times when it’s in the calendar. You're like, ‘I know you’re tired, but it’s been two weeks, so we really got to get to it,’” Bell told Self.

Bell and Shepard have been married since 2013, but the actress has admitted in the past that there was “no spark” when she first laid eyes on him at a dinner party in 2007. She told TODAY in 2019 that Shepard “talked too much” while he was suspicious of her “unbridled happiness” with her friends.

Now, two kids and nearly eight years of marriage later, she is still into him. “The beautiful thing about him is he finds the comedy in everything,” Bell told Self. It’s just that, like so many other parents out there, trying to find the time to have sex can be tough. As Bell’s relationship with Shepard proves, scheduling sexy time has nothing to do with losing interest in your partner and everything to do with wanting to make sure you stay connected.

Shepard and Bell have really gone through it this past year. Like millions of other people, they have been raising kids — their daughters, 8-year-old Lincoln and 6-year-old Delta — through a pandemic. Dealing with homeschooling and the uncertainty of the world around them doesn’t exactly make for a romantic environment, as we all know. Add to that their own personal struggle with Shepard’s relapse after 16 years of sobriety. But they have made it through. By making a choice to be happy.

Bell told Women’s Health in 2017, “I just want to make sure we’re being responsible in saying: I have a ton of fun in my relationship, I love it more than I could possibly articulate, but it is a ton of work. But the other side is we choose to be this happy. You can wake up in the morning and choose to be grumpy or you can choose to be happy…Loving him is a choice.”

Choosing happiness and scheduling sex. Not bad advice for a successful marriage.