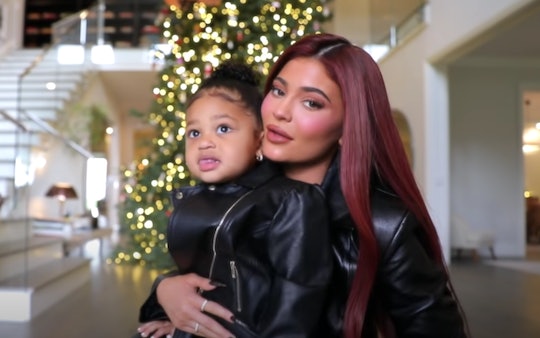 Kylie Jenner Is So Proud Of Stormi's Snowboarding Skills

Kylie Jenner's got a little snowboarder on her hands, as evidenced by her latest Instagram video of Stormi snowboarding down a mountain like she's been doing it for years.

Indeed, the little girl has got a lot of talent for just being nearly 3 years old. In the video posted on Instagram over the weekend, Jenner showed off her daughter's new snowboarding skills during a recent vacation to Colorado. Stormi can be seen riding down a very small slope decked out in her snowsuit, helmet, and protective gear while an instructor gives her a boost to get down the hill. Stormi not only seamlessly rides down the hill, but she perfectly stops herself without falling down.

"Give me a high five!" Jenner proudly says in the video. "That was amazing!" As for Stormi, she sounds just as elated excited, saying "Weeeeee!"

Jenner posted more videos of Stormi's snowboarding to her Instagram Story, where she captured her daughter snowboarding directly into her legs and jumping on the snowboard with the help of an instructor.

This isn't the first time they've hit the slopes. The Keeping Up With The Kardashians star has shown off her own snowboarding skills in the past, and even got Stormi fitted for her own board, which she showed in videos posted to her Instagram Story in 2019. "I've been waiting for this moment for too long!!" Jenner captioned the videos at the time. A source told People that same year that Jenner was "beyond excited" to bring her then-22-month-old snowboarding in Park City, Utah. "Kylie couldn't wait to take Stormi on her first snow vacation," the source said.

But Jenner isn't the only one who is so proud of the progress that Stormi has made on the slopes in the past year. "Too precious for this world," Hailey Bieber commented on Jenner's new video. "She is such a rock star!!!" Khloé Kardashian added. "Go Stormi go!!!!"