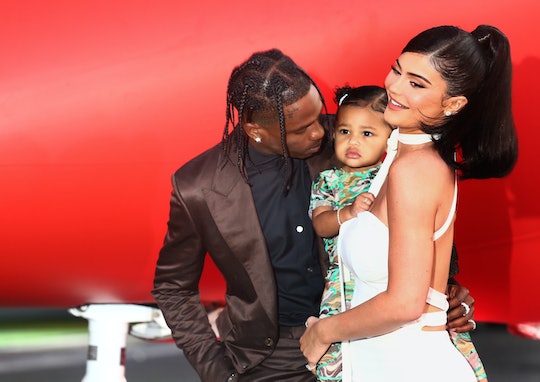 It's the chubby cheeks for me.

Remember when the internet simply could not stop obsessing over reports and rumors that Kylie Jenner was pregnant with her first child? But now, nearly three years later, Kylie Jenner shared an unseen photo of her daughter, Stormi, that was taken just days after she gave birth, giving her fans a behind-the-scenes look at that sweet moment in time that was kept secret for so long.

Over the weekend, the Keeping Up With The Kardashians star took part in the new "post a pic of" trend on Instagram. For the trend, celebs and others are asking their followers to request photos for them to publicly post. These requests could range from photos of their pets to their favorite memory from the year. For Jenner, some fans requested photos of her favorite book and makeup look, while others wanted to see photos of her adorable 2-and-a-half-year-old daughter, Stormi Webster, with rapper Travis Scott. And boy did she deliver.

On her Instagram Story, Jenner shared numerous photos of Stormi riding a scooter, walking her dogs, and sitting in front of her first "big girl bed." But Jenner's unseen photo of baby Stormi, which was taken when she was just a week old, was the real treat. In the never-before-seen photo, Stormi is sleeping while swaddled in a white blanket as her full head of hair and chubby cheeks are on full display. "1 week old," Jenner captioned the photo.

It's been a while since Jenner has shared baby photos of Stormi. The Kylie Cosmetics makeup mogul kept her pregnancy with Stormi a secret until she finally confirmed that she welcomed a daughter on Feb. 1, 2018. And Jenner did not share the first photos of Stormi's face until March. "I understand you're used to me bringing you along on all my journeys," Jenner wrote on Instagram at the time that she announced Stormi's birth. "My pregnancy was one I chose not to do in front of the world. I knew for myself I needed to prepare for this role of a lifetime in the most positive, stress free, and healthy way I knew how."

But now fans are finally getting a glimpse at those sweet, sleepy, and stressful moments.

Since her arrival, Stormi has become the star of her mom's Instagram account, where Jenner posts photos of her daughter in designer clothes and looking like such a "big girl." "My baby's turning three soon and mommy's not OK," Jenner wrote in the caption of a recent Instagram post.

Who knows, perhaps Jenner will be feeling extra nostalgic in the weeks leading up to Stormi's birthday and will share a few more unseen gems with the world.