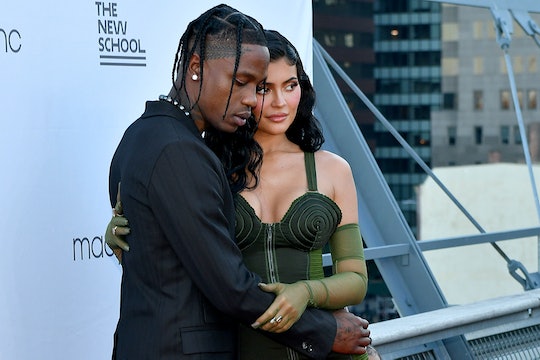 His little shoes are so cute!

Kylie Jenner and Travis Scott’s 4-year-old daughter Stormi may have been hunting for Easter eggs yesterday, but fans were on the lookout for something else — a glimpse at the couple’s 2-month-old baby boy. And they were not disappointed!

In a series of photos showing her family’s fun-filled Easter celebration on Sunday, Jenner posted a rare picture of her newest little “bunny,” who was being held by his dad. Although you couldn’t see his face, his adorable jeans and stylish black-and-red kicks were on full display.

The post, which The Kardashians star simply captioned with a white heart and a bunny emoji, included shots of the whole family’s shoes, including pastel-colored Easter Nikes on Scott, white tennis shoes on Stormi, and white Balenciaga slides on Jenner. The Easter photos also showed a sneak peek into their family event. There were snaps of Stormi hunting for eggs on the beautiful spring day, elaborate chocolate eggs decorated with each person’s name, an overflowing Easter basket, Stormi in pink dress with a flower clip in her hair, and Jenner and Stormi posing together.

The Kylie Cosmetics founder also shared behind-the-scenes pictures and videos of Easter on her Instagram Stories. You could see the pink-and-white flowers in vases filled with eggs on their table, with each place set with its own chocolate egg. There was also a shot of pastel-colored gumball machines, which Jenner wrote, “had to get these for my girls.” She also posted the kids playing with new toys and decorating eggs, as well as a picture of a new green-and-white Dior outfit for her son with the caption “so cute.”

This is one of the few teasers Jenner has posted of their baby boy, who was born Feb. 2 with the name Wolf Webster. However, the couple decided to change his name when he was a little over one month old. She wrote on Instagram on March 22, “FYI our son’s name isn’t Wolf anymore,” Jenner wrote. “We just really didn’t feel like it was him. Just wanted to share because I keep seeing Wolf everywhere.”

In an interview with USA Today on April 11, Jenner revealed that the couple are “in the process” of changing his name. “We had to quickly sign the birth certificate, and then I knew the second I signed the birth certificate that I was probably gonna change his name,” she said. “It just didn't suit him. We haven't legally changed his name yet. We're in the process, so it just wouldn't feel right to share anything when we don't have an official name.”

Although he may not have an official name yet, this little boy is officially the cutest little fashion icon. Would you expect anything less from a Jenner baby?