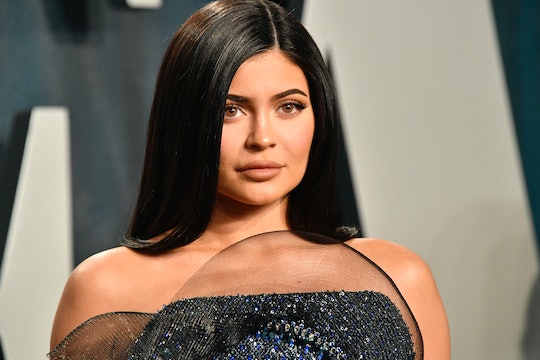 Her son previously known as Wolf.

So we know that Kylie Jenner and Travis Scott welcomed their second child on Feb. 2, 2022. We know that 4-year-old Stormi Webster has a little brother. For a while, we even knew his name, but that all got changed. And guess what? We won’t be learning his new name anytime soon so we might as well get accustomed to calling him the baby previously known as Wolf.

The Kylie Cosmetics mogul initially shared her son’s name on Feb. 11 in an Instagram Story with the simple message “Wolf Webster” accompanied by a heart emoji. Webster is the last name her little boy shares with sister Stormi and is the real last name of her dad Travis Scott, who was born Jacques Webster. His last name might still be Webster, but his first isn’t Wolf anymore. In fact, no one knows for sure what it’s officially going to be. Perhaps not even his parents.

Wolf was only her son’s name for a month or so. On March 22, Jenner took to Instagram again to let her followers know the name didn’t feel right for their little boy. “FYI our son's name isn't Wolf anymore,0” she wrote. “We just really didn't feel like it was him. Just wanted to share because I keep seeing Wolf everywhere.”

So where did the name come from in the first place? Apparently it “wasn’t even on our list, it was something Khloé suggested,” Jenner told Entertainment Weekly. Not that she didn’t like the name, she reassured her older sister when she said, “Don’t do this to me.” It “just wasn’t him.” It seems Jenner felt a bit of pressure because she only had so much time to sign the birth certificate, which is perhaps why she won’t be rushed when it comes to changing her baby boy’s name officially.

This baby boy’s parents might be holding off on naming their son officially, but this hasn’t stopped fans from guessing what it could possibly be. A Reddit post dedicated to those guesses includes names like Angel (perhaps because Kris Jenner said her daughter’s angel number is 2, the day her son was born), Knight, or even Jacques after his father. Keep guessing everyone, we won’t know for ages.

More Like This
Tan France Reveals The Incredible Care Package Gigi Hadid Sent For Baby Ismail
Ed Sheeran Just Revealed He's A Dad Of Two With The Sweetest Instagram Announcement
Rihanna & A$AP Rocky’s Baby Is Here!
Cardi B Shows Us All How To Change Diapers With Long Nails In Helpful & Hilarious Video