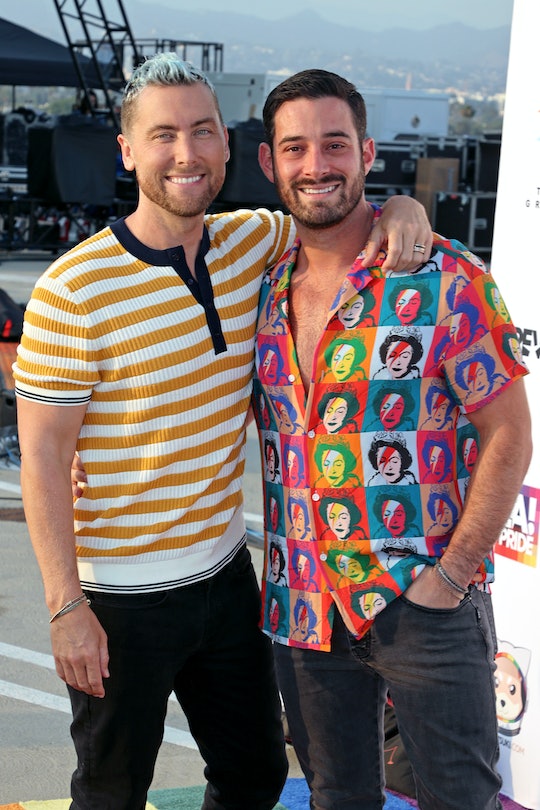 The dad-to-be reflects on his journey from being “so closeted” to announcing his parenting news during Pride Month.

As he gets ready to become a first-time dad to twins, Lance Bass is reflecting on his journey from being “so closeted” while hiding his sexuality during his youth, to celebrating his identity and announcing his parenting news during Pride Month. Bass and his husband of six years, Michael Turchin, revealed they’re expecting twins in a fun, horror film-themed TikTok post.

“It’s perfect timing,” Bass recently told Romper at Bingo Under the Stars, where he joined forces with *NSYNC bandmate Joey Fatone and Backstreet Boys members Nick Carter and AJ McLean to debut their collaborative group “Back-Sync.” “It’s an added bonus to be pregnant right now, because Pride is all about celebrating our freedoms and for so long, our community didn't feel like we could even have families. We were always told, ‘No.’”

Bass, who has previously shared how struggles with his sexuality caused depression during *NSYNC’s heyday, added that back in the nineties he could never have imagined the day would come when he would not only get to embrace and celebrate his identity publicly, but do so while starting a family.

“I never thought this moment would come,” he said. “Never. Back in the day, I was so closeted. I look at my interviews from when I was with *NSYNC and I feel like that wasn’t even me. I don't sound the same, I don't act the same. I was hiding my true self, but now I get to just be me and it's the best feeling.”

Bass, 42, and Turchin’s road to parenthood has been fraught with challenges, including multiple attempts at surrogacy, IVF heartache and a miscarriage. The two reportedly went through nine egg donors and will welcome their twins via a surrogate later this year.

Having endured so many setbacks, the couple are thrilled to finally be able to enjoy preparations for their babies’ arrival. And, the postal service has their work cut out for them as a result: Bass notes that he and artist Turchin, 34, can’t keep up with opening all the packages that loved ones keep sending their way.

“We’ve been inundated with so much baby stuff already – everyday, 10 boxes show up with strollers, Pampers, you-name-it,” he says. “It’s insane. They're not even here yet! It feels like my friends are more excited than we are.”

With just a few months to go, Bass has also been doing lots of reading. “I've been reading lots of books on how to make sure you can keep babies alive,” he laughs. “That’s important!”

Bass does have one advantage when it comes to raising his daughter — his extensive experience with *NSYNC fangirls around the globe over the last 20+ years. And he would be more than happy if his daughter became a fangirl someday.

“Being in a group like *NSYNC, I got to know women very well. Our market was 99% women,” he says. “If my girl turns out to be a really great fan, I would love that because we met some incredible ladies along the way. We have some of the best fans ever.”

The ongoing love and loyalty of those fans was rewarded with *NSYNC’s partial comeback via Back-Sync at The Grove in Los Angeles. The boy banders united for a performance and bingo night in celebration of Pride Month. The evening benefitted LA Pride and The Trevor Project, who were presented with a cryptocurrency check for $1 million in $TKINU tokens on behalf of the singers’ involvement with cryptocurrency project Mission Tsuki.

“It's such an amazing organization saving so many lives out there,” Bass said on stage about The Trevor Project, which provides support to LGBTQ youth. “If you need someone to talk to, give them a call – even anonymously. That’s what they’re there for.”