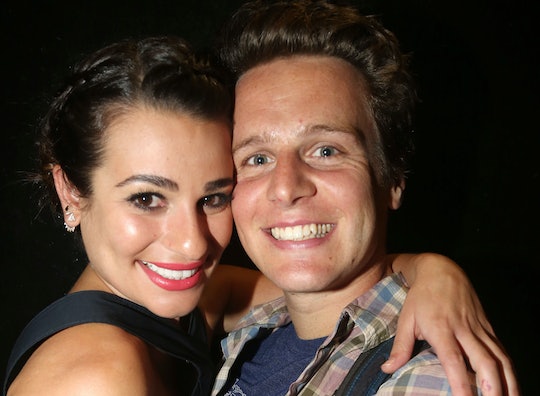 Sure beats a friendship necklace!

Once you have a kid, it’s only natural to want your closest friend to become a parent too so you can sit side-by-side ingesting caffeine on the playground bench together. Glee star Lea Michele is definitely ready to put in that iced coffee order and start planning some playdates with her bestie, Jonathan Groff. In a recent interview, Michele revealed she would be thrilled to be a surrogate for Broadway and TV actor, Groff’s, future baby whenever he is ready to be a dad.

“I’ll carry your baby. I will,” Michele told Groff in the joint interview with People after Groff was asked if he had baby fever. Michele might have jumped the gun a little bit because Groff didn’t exactly say he was gearing up to be a father, but the duo have been friends for so long, maybe Michele has some insider BFF info.

Michele and Groff met 15 years ago on the set of the Broadway show, Spring Awakening, where they starred opposite each other in the coming-of-age hit that would launch both of their successful careers. Still best friends over a decade later, Groff is a staple on Michele’s Instagram feed, and she recently shared pictures of the inseparable pair together on a scenic vacation and posing for cute selfies on the busy streets of New York City. “JG just taking over my feed,” she captioned a picture of the talented twosome against a backdrop of the Big Apple.

Michele, who is a mother to 20-month-old son, Ever Leo, was super excited about the possibility of being a surrogate for her former co-star and current fave person. “Hell yeah! I love being pregnant. It's so much fun,” she said in the People interview.

While Michele might relish that nine months of gestating a human being inside her body, she’s also been frank about the challenges new moms can faces after the baby is born, including postpartum hair loss. In a previous Instagram Story, Michele had also considered ditching her long locks to make the swap for a much more baby-friendly, “mom bob.” From recent red carpets to her latest social media posts, looks like the singer finally followed through on her plans because she’s been rocking a shorter, shoulder-length look. In her most recent post on Instagram, she even asked followers for advice on her chopped tresses: “The side or center part debate continues,” she captioned her photo.

However you prefer Lea Michele’s hair, fans of Broadway and the TV show Glee are in for a massive musical treat courtesy of HBO. Michele and Groff are soon reuniting for the documentary, Those You’ve Known, a tribute to the Tony Award-winning Spring Awakening. With a mix of exclusive performances and cast interviews, this movie sounds like the ultimate fantasy of any self-respecting theater camp kid.

As for Groff’s future plans, while the possibility of fatherhood remains up in the air, it’s pretty exciting to imagine how excessively talented a future, human Michele-Groff collab could be. One thing’s for certain, that doubly-talented kid would absolutely crush baby music class.